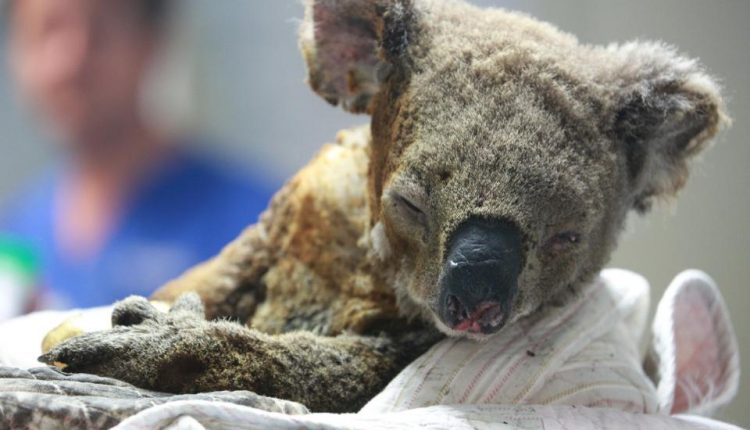 Koalas aren’t functionally extinct, but they need our help

Commentary: Reports abound that recent bushfires have pushed the cuddly marsupial to the brink. The species has actually been under threat for much longer.

The koala is one of the most iconic Australian marsupials. The gray fuzzballs spend nearly all their time in the trees, surviving on a diet of toxic leaves and a healthy routine of extended naps. As Australia suffered through unprecedented bushfires over the past few weeks, the plight of the koala has been front page news. Images abound of the marsupials with charred skin and dehydration plastered across their faces, crawling to safety as flames lash at surrounding bushland.

The bushfires have wreaked havoc across Australia, destroying hundreds of thousands of hectares. It’s estimated up to 1,000 koalas may have died, including half the population living in Port Macquarie. It’s a tragedy for a species already struggling to survive against the effects of climate change, disease and deforestation.

A number of recent headlines suggest the bushfires destroyed up to 80% of the koala’s habitat, rendering the species “functionally extinct.” This has elicited a visceral response online, with articles shared far and wide across social media. And that makes sense: The koala is a beloved species inherently tied to the Australian identity, and its decline speaks directly to failures in combating climate change. The species is an innocent bystander quite literally in the line of fire because of human inaction.

But the (somewhat) good news is that experts don’t agree koalas are “functionally extinct” and it’s not the bushfires that pushed them to the brink. The idea the species was in danger was broached long before bushfires began to slither across Australia.

Related: Why Do Koalas Hug Trees?

“I do not believe koalas are functionally extinct,” says Rebecca Johnson, a koala geneticist at the Australian Museum. “That said, the fires are likely to have had a huge impact on what we know are some extremely valuable populations who are important for the long term survival of the species.”

On May 10, the Australian Koala Foundation (AKF), a nonprofit dedicated to conservation of the iconic marsupial, dropped a press release stating the organization believes that “koalas may be functionally extinct in the entire landscape of Australia” and that koala numbers could be as low as 80,000. The declaration was made just prior to Australia’s last election, when climate change was a core political issue.

The press release didn’t provide information on how koala numbers were counted. The AKF did not immediately respond to a request for comment.

Related: Everything You Need to Know About Koalas | Wild Koala Day | Love Nature

Following the initial declaration of “functional extinction” in May, Christine Adams-Hosking, a conservationist at the University of Queensland, penned an article for The Conversation outlining the fate of the koala in Australia. In it, Adams-Hosking made it clear the functional extinction tag had likely been applied with a little too much haste. In a study conducted in 2016, a collaboration of researchers attempted to quantify how many koalas were left, but it’s a complex game.

“To determine whether each population of koalas scattered across eastern Australia is functionally extinct would require a gargantuan effort,” wrote Adams-Hosking. It’s incredibly difficult for scientists to get a full grasp on koala numbers across Australia, so categorizing the species as “functionally extinct” is difficult. Later, in a report from New Scientist, Adams-Hosking said “there are koalas all over the place and some of them are doing fine.”

Jacquelyn Gill, a climate scientist at the University of Maine, commented on the new reports and suggested in a tweet that there may be conflicts of interest at play, with “a few cases … of nonprofits reporting exaggerated population declines.”

The koala is in trouble. This isn’t a way to downplay the current crisis: Australia’s extinction rate is the highest in the world, and local koala populations are being erased.

There’s no doubt koalas are in danger of disappearing for good. Population numbers have declined dramatically in the last century. The recent spate of bushfires play a role this decrease, but the bigger story is much more grim. Hunting, during the 1920s, killed hundreds of thousands of koalas. Urbanization has cut populations off from one another, lowering their genetic diversity and making them more prone to diseases like chlamydia. Habitat clearing has removed their food source.

“Koalas are the iconic reminder of what is happening more broadly to our biodiversity and our ecosystems, directly as a result of human impacts,” says Johnson. “They should be the catalyst to start and have these conversations to understand and protect all our biodiversity because they aren’t the only species that needs protecting.”

However, headlines shouting that the koala is “functionally extinct ‘after’ the bushfires” are potentially damaging. Exaggerated claims of the koalas decline can be debunked with a cursory Google search, undermining the trust in scientific institutions and science reporting.

In addition, the AKF has made it clear that its definition of “functionally extinct” means the species is “beyond the point of recovery” and suggests the koala is doomed. For some, that may be a call to arms. For others, it could be a sign that we tried but now we might as well give up. Social media is already grieving the dead. It also undermines the work of conservation biologists trying to save the species.

Researchers are working tirelessly to keep the species afloat. Johnson is using the power of the genetic code to open up entirely new avenues for conservation work. In July 2018, Johnson and colleagues sequenced the koala genome for the first time, identifying genes that might help prevent infectious disease and protect the young.

Yes, the koala is under threat. Yes, climate change is having a huge impact on the cuddly icon. Yes, Australians need to do more to ensure its survival. But exaggerating claims of the species’ demise in the shadow of a national disaster isn’t the way forward.