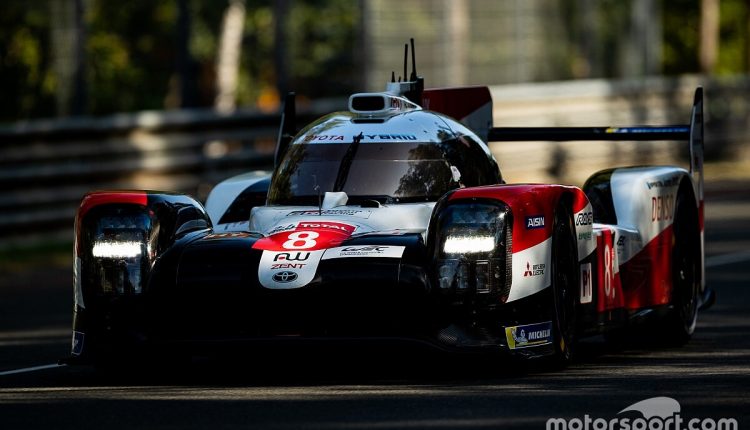 After overnight rain the Circuit de la Sarthe was in tricky condition at the start of the 15-minute warm-up session, which meant that most teams were reluctant to go out on track.

Although most teams decided to complete one or more reconnaissance laps, just 33 of the 59 participants set some sort of laptime.

Mike Conway initially clocked a best time of 3m39.375s in the #7 Toyota TS050 Hybrid, with teammate Buemi in the #8 sister car going quicker after the chequered flag dropped to post a 3m36.693s, still over 15 seconds slower than Toyota’s dry-weather pace.

Neither the two Rebellion cars or the lone ByKolles entry decided to set a laptime.

That was over six seconds quicker than Matthieu Vaxiviere in the Panis Racing Oreca and eight seconds ahead of Nick Foster in the Eurasia Motorsport Ligier.

Polesitter United Autosports was one of the many LMP2 teams to not set a laptime.

The third-fastest GTE entrant was the leading GTE Am car of Giancarlo Fisichella, the #54 AF Corse Ferrari. The former F1 driver put a 4m17.393s on the board.

The short damp session preludes the 88th running of the Le Mans 24 Hours, which is also expected to be affected by rain. Many weather forecasts are predicting heavy rain on Saturday night and in the early hours of Sunday, with further wet spells expected during the final hours of the event.

The mixed conditions will be particularly challenging for the many amateur drivers and the 40-odd Le Mans rookies at the start of the race, with track time limited on a condensed race week schedule.

The French endurance classic will start and finish slightly earlier than usual at 2:30pm local time.