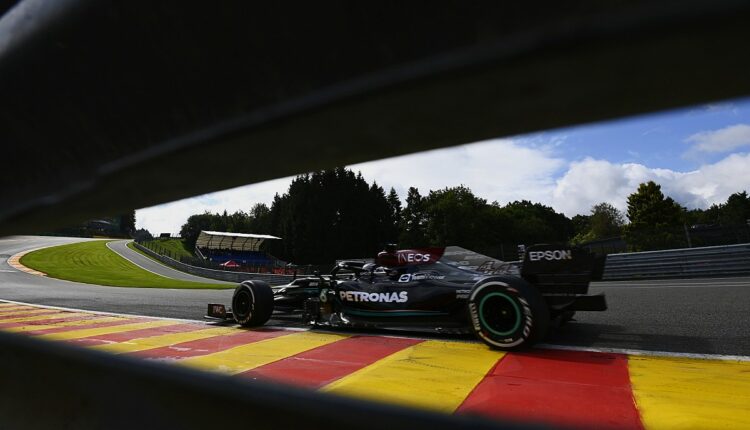 Speaking after the first day of action for the Belgian Grand Prix, Hamilton reckoned a new bump that had appeared at the bottom of Eau Rouge was making it an ordeal to run through there.

“They’ve kind of ruined it a little bit with whatever it is. I don’t know if they have got a new patch [of asphalt] there, but there’s a massive bump right at the compression point, which we’ve never had there before.

“It’s really, really sharp up through the [body]. You feel it on the backside. But I’m sure they will fix it. I think has something to do with the mudslides, the rain, or something like that.”

Hamilton’s comments came before a massive accident involving six drivers during W Series qualifying at Eau Rouge. W Series confirmed all drivers are okay and said it would issue a full update on the incident shortly.

Spa was recently hit with bad flooding as torrential rain hit that area of Europe, with several outer track roads being damaged.

But despite his feelings on Eau Rouge, Hamilton was quite encouraged by the opening day of running, despite title rival Max Verstappen topping the timesheets.

“It’s been an OK day, the sessions are very short,” he said. “So we don’t get a huge amount of [running]. There’s not a lot knowledge you’re gaining from the short time you have.

“We’re trying to navigate the best way we can. At least it was dry for P2, so we’ve got some laps in. But the car wasn’t quite underneath me today. So I’ve got to do some work tonight and try and figure that out.”

Hamilton said key for the weekend was deciding on the right downforce levels, with teams juggling the different nature of Spa’s different sectors, with the added complication of rain predicted for Sunday.

“I think that if it it’s guaranteed to rain, then you would want more downforce,” he said. “But then if it doesn’t rain, and the weather man is wrong, or weather woman’s wrong, then you’re a sitting duck on the straights.

“So yeah, we have to be very, very careful and cautious in the settings changes we make the next day.”