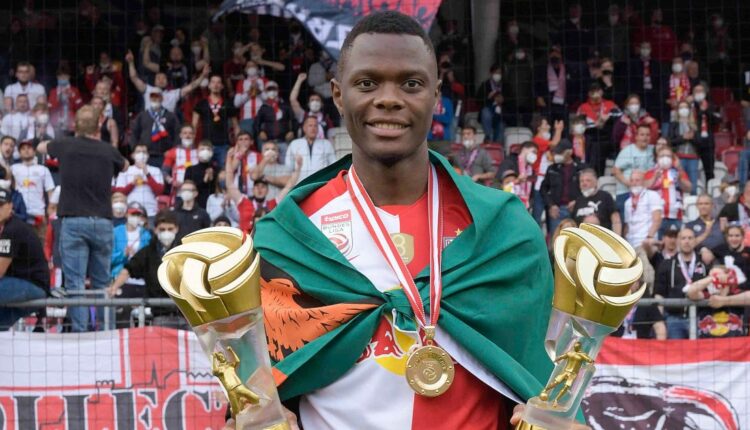 The 22-year-old first moved to Europe in 2017 as he signed for Austrian First League outfit Liefering on loan from Kafue Celtic in Zambia.

Daka later joined Austrian Bundesliga side Red Bull Salzburg on a permanent deal during the 2017/18 campaign.

Follow Italy’s lead, Gareth… get Gazza on the bench

The forward has been a regular for Salzburg for the last three seasons. In this time, he has established himself as one of the most prolific young strikers in Europe.

Daka scored 27 goals across all competitions in 2019/20. He followed that up with 34 goals from just 42 appearances for them this term.

Man City, Man United and Liverpool are among the teams that have been linked with the in-form striker.

But reliable journalist Fabrizio Romano has revealed via his Twitter that Daka is “set to join” Leicester City and that the deal is done.

Salzburg have accepted the Foxes’ bid and Brendan Rodgers’ side are “planning to announce the new signing next week”.

Leicester are not wasting any time to get their transfer business done. They have reportedly sealed the signing of Lille midfielder Boubakary Soumare for €25m.

The Foxes have also been linked with Celtic attacker Odsonne Edouard.

“I think Yves Bissouma would be the perfect fit for Liverpool. In terms of what Liverpool want from their midfielders, Bissouma is very strong and he’s very good on the ball.

“He’s more of a defensively minded midfielder, but if you look at the way Liverpool’s front three play, then you don’t necessarily need an attacking midfielder with an eye for goal, because if Liverpool had that then Mohamed Salah and Sadio Mane wouldn’t have the opportunity to score as many goals and it would affect the way they play.

“That’s why I believe that Bissouma would suit Liverpool and that front three perfectly. He would also be a shield in front of the back four and for me, he and Ousmane Dembele would be the perfect additions for Liverpool next season.”

The F1 tyre tricks that new clampdown will stamp out