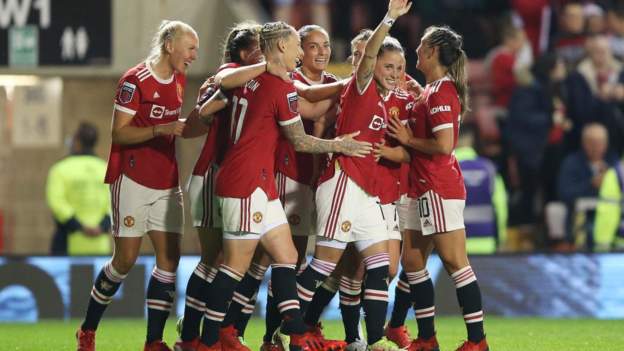 Earlier, Reading’s Brooke Chaplen hit the crossbar, with replays suggesting the ball had bounced over the line.

Watch Everton v Manchester City in the WSL live on BBC One on SaturdayRelive Manchester United’s win over ReadingWSL signings to watch this seasonFootball Daily podcast – WSL season preview: Bigger and better than everBut with no goalline technology or video assistant referee in the women’s game, the officials were unable to take a closer look at whether it was a goal or not.

In the first WSL game to be screened by Sky Sports as part of a new broadcast deal alongside the BBC, United capitalised with Batlle firing in a second moments later, sending the home fans into delirium.

“Sky Sports slowed it down for me on the replay just to make it even more painful,” said Reading manager Kelly Chambers afterwards.

“Things will take time despite the speed the women’s game is moving at. I know they are working heavily to improve the level of the officials in the game and you hope we can get those added additions in the not-so-near future.”

Further chances fell for Leah Galton – who missed a glaring half-volley in the first half – as she nodded a header wide at the back post.

Substitute Martha Thomas, making her competitive debut, glanced an effort wide and saw a cross roll inches behind her as she waited unmarked in the centre, before curling a shot past the right post.

But aside from Chaplen’s effort which hit the crossbar, Reading only had half chances – the midfielder herself striking over the bar from long range in the first half.

Victory sets United on their way for a season where they are pursuing a Champions League qualification spot.

‘I will never turn down goalline technology’Manchester United boss Marc Skinner: “If you can use technology it would be brilliant. We can focus on that but there are other things we need to get right too to continue the growth of our game.

“Hopefully in our lifetime we see that growth and we get that support for these wonderful players. I will never turn that down.”

Former Leicester City and England striker Emile Heskey on Sky Sports: “If we all played in the same stadiums and all had the same facilities then fair enough, maybe you could use technology.

“But funds can be allocated to better places right now [in the women’s game]. Maybe the next step is goalline technology.”

Ex-Manchester United manager Casey Stoney on Sky Sports: “It is an area that needs improving. It’s a professional game with amateur officiating.

“We watched that in real time and couldn’t say if it was a goal so it is a huge task. There are more improvements to be made.”

Jackie Groenen (Manchester United Women) wins a free kick in the attacking half.

Attempt missed. Jackie Groenen (Manchester United Women) right footed shot from outside the box is close, but misses to the right following a corner.

Attempt missed. Martha Thomas (Manchester United Women) right footed shot from the left side of the box is close, but misses to the right. Assisted by Jackie Groenen.

Attempt missed. Jeon Ga-Eul (Reading Women) header from the centre of the box misses to the left. Assisted by Emma Harries with a cross.

Emma Harries (Reading Women) wins a free kick in the defensive half.

Kirsty Hanson (Manchester United Women) wins a free kick in the attacking half.