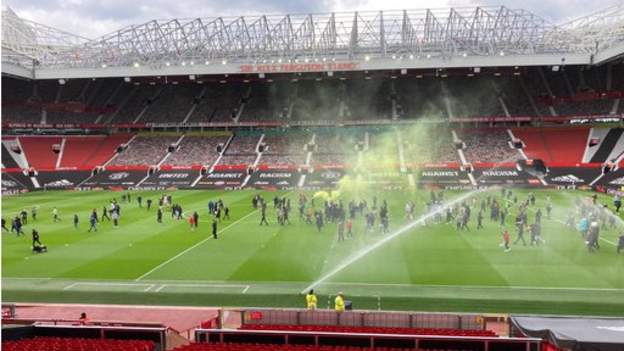 Manchester United fans break on to Old Trafford pitch to protest against club ownershipManchester United’s postponed home Premier League match with Liverpool has been rearranged for Thursday, 13 May (20:15 BST).

The decision means United must play two games in the space of 50 hours as their home game against Leicester has been moved forward a day to Tuesday, 11 May.

Liverpool’s game at West Brom, which was thought might be moved to accommodate the fixture, will remain as scheduled on Sunday, 16 May.

Thousands of United supporters demonstrated against the Glazer family’s ownership at Old Trafford and the team hotel prior to the Liverpool game on Sunday, forcing its abandonment.

Solskjaer says protests must be ‘civilised’No away fans at final two rounds of Premier League gamesPolice say six officers were injured during the protests, which also saw around 200 fans break into the stadium.

Sunday’s game, which had been scheduled to kick off at 16:30 BST, was the first Premier League match to be postponed because of fan protests.

United manager Ole Gunnar Solskjaer said “it was a difficult day” for them, and added that fan protests must remain “civilised” in future.

Any fan protests must remain ‘civilised and peaceful’ – SolskjaerDespite rumours of potential disruption to their travel plans, United arrived at the airport for their flight to Italy for Thursday’s Europa League semi-final with Roma without a problem.

The game in Rome kicks off what is now a busy schedule for United, who are second in the Premier League table, and will have to play four games in eight days, including a trip to Aston Villa on Sunday:

When asked about the possible need to boost security around the Foxes squad, Rodgers said: “We’ve got no concerns.

“Obviously we’ve seen the protest last weekend. We condemn any violence that was seen on the day, but certainly for the Manchester United supporters there has clearly been a source of frustration for many, many years for them, and they come out to support the team and support their role within that.

“But for us, going there next week, we’ve got no concerns whatsoever. We look forward to going there and playing the game.”