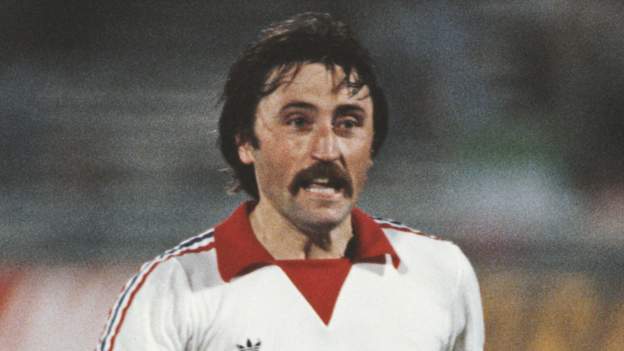 Alan Shearer’s goal against the Netherlands at Euro 96 makes our top 10 – but where does it rank?Fifteen tournaments have brought 687 goals – but which is the best ever scored at a European Championship?

Gary Lineker, Alan Shearer and Micah Richards have been discussing the very best Euros goals in the latest Match of the Day: Top 10 podcast.

You can listen to the podcast on BBC Sounds.

Antonin Panenka (Shearer: 10th, Richards: 3rd)Antonin Panenka scored the winning penalty for Czechoslovakia after the 1976 European Championship final against West Germany had gone to a shootout. Panenka softly chipped the ball up the middle of the goal as goalkeeper Sepp Maier dived away. This chip shot penalty style is now named after him.

Shearer: You always look an idiot when it doesn’t come off but when it does, it’s pretty spectacular. But it was something I would never try – never ever. I did it in a friendly once, that’s all – but in such an important game, to win the Euros? Come on.

Lineker: If the goalkeeper just stands there, you look a fool or if you don’t hit it sweet. It’s great when they go in.

It’s got to be something special when it’s named after you. It’s an iconic goal and a remarkable moment.

Zlatan Ibrahimovic (Shearer: 9th, Richards: 9th) Zlatan Ibrahimovic scored for Sweden with a terrific volley in their final Euro 2012 group game against France, setting up a 2-0 win – but it was too late to give them a chance of making the knockout stages.

Lineker: It’s probably not the best Zlatan goal I’ve seen. He is a scorer of spectacular goals and especially that one against England when he scored four, that overhead kick was unbelievable. That probably might have been higher but it was still a great volley. He’s a world-class footballer, his goal record is unbelievable.

Shearer: There’s been so many over his career, it’s difficult to remember them all but this one was pretty special wasn’t it? It was a brilliant goal, the athleticism to do what he did was great.

Richards: He splits opinions. I just don’t know why he doesn’t get the respect he deserves.

Lineker: It was a beautiful bit of football and team goal.

Shearer: It was a great piece of skill for him to go one-two past the defence and then stick it in the corner. It was an excellent goal.

Alan Shearer (Shearer: 4th, Richards: 8th) Alan Shearer had already scored a penalty when he finished a fine move – assisted by Paul Gascoigne and Teddy Sheringham – in a 4-1 win over the Netherlands at Euro 96. England’s victory at Wembley took them through as Group A winners.

Shearer: It was a world-class strike! I looked at that spot and thought: That’s the square of the net I’m going to put it into. It was perfection!

I tell you one thing – if I was Teddy, I wouldn’t have passed it, as he had a great opportunity to shoot and I’m surprised Gazza passed it and then for Teddy to knock it square as well – I was there with my arms in the air screaming for it!

Richards: I watched it this morning and it sort of bobbled up a little bit and you shape it up, so I’m following by your own rules and everything was set for the other corner. Ridiculous, I’m not having it, I should have put it at 10!

Lineker: It’s not even a shot!

Lineker: It was a free-kick and a wonderfully struck free-kick. Free-kicks are free-kicks, though, ultimately – just bang them in.

Richards: Lovely technique – but you can be lucky and score that, can’t you? So that’s why it’s a bit further down.

Shearer: It’s hard enough doing a scissor kick, let alone from outside the box – a yard or two out it was. I would never even attempt to try one of those myself because I’d have done my back in.

Richards: I scored one like that in training – magnificent it was!

Davor Suker (Shearer: 3rd, Richards: 6th)Davor Suker celebrates with Zvonimir Boban after his classy chip against Denmark at Euro 96Davor Suker finished a superb counter-attack with a smartly judged chip over Peter Schmeichel as Croatia beat Denmark 3-0 at Hillsborough in the group stage at Euro 96. Croatia went on to the quarter-finals, losing to eventual tournament winners Germany.

Richards: Schmeichel was running back, wasn’t he? He wasn’t set but the finish was incredible. It would have been higher but they’re chasing the game, Schmeichel’s up for a corner, they’re running back, he’s not properly set and it’s chipped in.

Shearer: The technique and the touch in the first place – he might have been offside – but the touch with his right foot to take it into his path and then the other touch is brilliant. And then when the ball’s rolling away from him, he comes across it with a left foot and gets it that high against that class of goalkeeper. That is a proper goal, that is. Unbelievable goal.

Lineker: What a gorgeous finish that was.

Hal Robson-Kanu (Shearer: 7th, Richards: 4th) Hal Robson-Kanu’s goal helped Wales reach a semi-final against eventual champions PortugalWales had never been beyond the quarter-finals at a major tournament – but Hal Robson-Kanu helped put that right with a spectacular strike as they beat Belgium 3-1 at Euro 2016. They went on to the semi-finals, losing to Portugal, who won the tournament.

Shearer: It was a brilliant goal and I didn’t see that coming from him at all – but the skill and the finish were superb! Great composure but I did have a laugh at the three defenders.

Lineker: It was probably Wales’ greatest game ever – to win that quarter-final against a really decent Belgium side, they played fantastically well with Bale and Ramsey.

Paul Gascoigne (Shearer: 2nd, Richards: 2nd) Paul Gascoigne’s sublime goal ensures England beat Scotland at Euro 96England went into Euro 96 under a cloud after some players had been pictured drinking heavily during a pre-tournament trip to Hong Kong, including in a nightclub where an infamous ‘dentist’s chair’ drinking game took place. But after a nervous 1-1 draw against Switzerland in their opening game, England picked up speed by beating Scotland 2-0, with Paul Gascoigne scoring a wonder goal and then mimicking the dentist’s chair game in his celebration.

Shearer: Only he could score that goal. He showed great ability to flick it over with the left foot. With the move, I think Teddy Sheringham went into Darren Anderton, who knocked it over to Gazza and then to flick it over and finish it the way he did on the volley was outstanding.

Richards: Fantastic finish, left foot, right foot – even as a young kid, I remember that.

Lineker: Extraordinary wasn’t it? And it’s not just the goal – it’s the celebration!

Lineker: One of the greatest goals of all time! I think he’s one of the true greats – he had it all. He was an all-round player, he had a beautiful touch, he was quick, he could turn, his finishing was fantastic and his goalscoring ratio was extraordinary.

Shearer: Everything about it was just perfection – the technique, how he got it so high, how he got the dip on it to get it over the keeper, the direction and the audacity to even try that from that angle is incredible! It has to be number one, it’s just an incredible goal. As soon as you say Van Basten’s volley, everyone knows what you’re on about.

New Thriller The System: Jake’s life changes radically after joining a personal development programmeThe ‘Armless Archer’: How a man born with no arms became a record-breaker