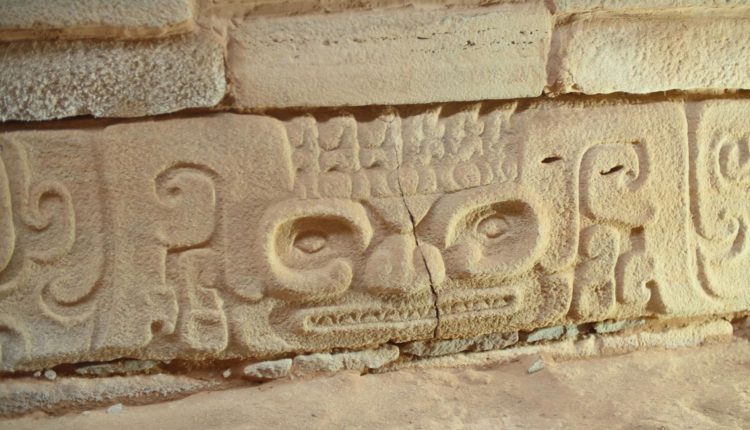 The stones didn’t give up their secrets easily. For decades, villagers in the dust-blown hills of China’s Loess Plateau believed that the crumbling rock walls near their homes were part of the Great Wall. It made sense. Remnants of the ancient barrier zigzag through this arid region inside the northern loop of the Yellow River, marking the frontier of Chinese rule stretching back more than 2,000 years.

But one detail was curiously out of place: Locals, and then looters, began finding in the rubble pieces of jade, some fashioned into discs and blades and scepters. Jade is not indigenous to this northernmost part of Shaanxi Province—the nearest source is almost a thousand miles away—and it was not a known feature of the Great Wall. Why was it showing up in abundance in this barren region so close to the Ordos Desert?

When a team of Chinese archaeologists came to investigate the conundrum several years ago, they began to unearth something wondrous and puzzling. The stones were not part of the Great Wall but the ruins of a magnificent fortress city. The ongoing dig has revealed more than six miles of protective walls surrounding a 230-foot-high pyramid and an inner sanctum with painted murals, jade artifacts—and gruesome evidence of human sacrifice.

Before excavations were suspended earlier this year due to the coronavirus pandemic, archaeologists uncovered 70 stunning relief sculptures in stone—serpents, monsters, and half-human beasts that resemble later Bronze Age iconography in China.

Even more astonishing: Carbon-dating determined that parts of Shimao, as the site is called (its original name is unknown), date back 4,300 years, nearly 2,000 years before the oldest section of the Great Wall—and 500 years before Chinese civilization took root on the Central Plains, several hundred miles to the south.

Shimao flourished in this seemingly remote region for nearly half a millennium, from around 2300 B.C. to 1800 B.C. Then, suddenly and mysteriously, it was abandoned. (Discover a fortress in Sri Lanka that was swallowed by the jungle.)

None of the ancient texts that have helped guide Chinese archaeology mention an ancient city so far north of the so-called “cradle of Chinese civilization,” much less one of such size, complexity, and intense interaction with outside cultures. Shimao is now the largest known Neolithic settlement in China—its 1,000-acre expanse is about 25 percent bigger than New York City’s Central Park—with art and technology that came from the northern steppe and would influence future Chinese dynasties.

Together with recent discoveries at other prehistoric sites nearby and along the coast, Shimao is forcing historians to rethink the beginnings of Chinese civilization—expanding their understanding of the geographical locations and outside influences of its earliest cultures.

“Shimao is one of the most important archaeological discoveries of this century,” says Sun Zhouyong, director of the Shaanxi Provincial Institute of Archaeology and leader of the dig at Shimao. “It gives us a new way of looking at the development of China’s early civilization.”

The first impression of Shimao, even as a partially excavated site in the barren hills above the Tuwei River, is of a city designed to face constant danger. The city was built in a conflict zone, a borderland dominated for thousands of years by warfare between herders of the northern steppe and farmers of the central plains.

To protect themselves from violent rivals, the Shimao elites molded their oblong 20-tiered pyramid on the highest of those hills. The structure, visible from every point of the city, is about half the height of Egypt’s Great Pyramid at Giza, which was built around the same time (2250 B.C.). But its base is four times larger, and the Shimao elites protected themselves further by inhabiting the top tier of the platform, which included a 20-acre palatial complex with its own water reservoir, craft workshops, and, most likely, ritual temples.

Radiating out from Shimao’s central pyramid were miles of inner and outer perimeter walls, an embryonic urban design that has been echoed in Chinese cities through the ages. The walls alone required 125,000 cubic meters of stone, equal in volume to 50 Olympic swimming pools—a huge undertaking in a Neolithic society whose population likely ranged between 10,000 and 20,000. The sheer size of the project leads archaeologists to believe that Shimao commanded the loyalty—and labor—of smaller satellite towns that have recently been discovered in its orbit.

More than 70 stone towns from the same Neolithic era, known as the Longshan period, have now been unearthed in northern Shaanxi province. Ten of them are in the Tuwei river basin, where Shimao is located. “These satellite villages or towns are like moons circling around the Shimao site,” Sun says. “Together they laid a solid social foundation for the early state formation at Shimao.”

Shimao’s fortifications are astonishing not just for their size but also for their ingenuity. The defensive system included barbicans (gates flanked by towers), baffle gates (allowing only one-way entry), and bastions (a projecting part of the wall allowing defensive fire in multiple directions). It also employed a “mamian” (“horse-face”) structure whose angles drew attackers into an area where defenders could pummel them from three sides—a design that would become a staple of Chinese defensive architecture. (Here’s why ancient fortifications in Europe had melted stone walls.)

Inside the stone walls, Sun’s team found another unexpected innovation: wooden beams used as reinforcement. Carbon-dated to 2300 B.C., the still-intact cypress beams represented a method of construction that scholars previously thought had only begun in the Han Dynasty—more than 2,000 years later.

The most grisly discovery came underneath the city’s eastern wall: 80 human skulls clustered in six pits—with no skeletons attached. (The two pits closest to the East Gate, the city’s principal entrance, contained exactly 24 skulls each.) The skulls’ number and placement suggest a ritual beheading during the laying of the wall’s foundation—the earliest known example of human sacrifice in Chinese history. Forensic scientists determined that almost all of the victims were young girls, most likely prisoners who belonged to a rival group.

“The scale of ritual violence observed at Shimao was unprecedented in early China,” says Li Min, an archaeologist at the University of California, Los Angeles, who has visited and written extensively about Shimao. The skulls at Shimao foreshadowed the massive human sacrifice that became what Li calls “a defining attribute of Shang civilization” many centuries later (from around 1600 to 1046 B.C.) before succeeding dynasties put an end to the practice.

The skulls are just one indication that the East Gate marked the entrance to a different world. Anyone walking across the threshold—above the buried sacrificial pits—would have been awed by more immediately visible signs. Several stone blocks in the high terrace walls were carved with lozenge designs, making them appear like enormous eyes gazing down at the East Gate. Wedged into the stone walls at regular intervals were thousands of pieces of black and dark green jade, shimmering ornaments that served both to ward off evil and to project the power and wealth of Shimao elites. The abundance of jade artifacts suggests that Shimao, with no source of its own, imported large quantities from distant trading partners.

Despite its seeming remoteness today, Shimao was not insulated from the outside world. It exchanged ideas, technology, and goods with a wide range of other cultures, from the Altai steppe to the north to coastal regions near the Yellow Sea.

“What is significant is that Shimao, along with many other areas, shows that China’s civilization has many roots and does not emerge just from the growth in the Central Plains on the middle Yellow River,” says Jessica Rawson, a professor of Chinese Art and Archaeology at the University of Oxford. “Several features were taken from the world beyond even today’s northern China—for example, stone structures, that have more relation to the steppe than to the Central Plains. Other features are herded animals for subsistence, oxen and sheep and metallurgy. These are actually very important technologies that China adopted and incorporated seamlessly into their culture.”

Many artifacts found at Shimao could only have come from distant lands. Besides the jade, archaeologists also found the remains of alligator skins, which must have come from a swampier region much farther south. Alligator-skin drums were likely used during ritual ceremonies, one sign of the vital role music played in Shimao palace life. (A 1,150-year-old tomb in China reveals first evidence for polo—on donkeys.)

Another discovery flummoxed Sun and his team: 20 identical pieces of bone, thin, smooth, and curved. The archaeologists guessed that these were combs or hairpins, until a musical scholar deduced that the bones were the earliest examples of a primitive reed instrument known in Chinese as the mouth reed and more colloquially as the Jew’s harp.

“Shimao is the birthplace of the mouth reed,” says Sun, noting that the instrument spread to more than 100 ethnic groups across the world. “It is an important discovery that provides valuable clues to explore the early flows of population and culture.”

Only a small fraction of Shimao has been excavated so far, so the discoveries keep coming. Along with the stone carvings uncovered last year, archaeologists found evidence of human busts and statues that were once set into the walls around the East Gate. We are only beginning to understand what the carvings might signify, says UCLA’s Li Min, but the anthropomorphic representations are “a very innovative and rare attempt.”

So much about Shimao remains cloaked in mystery, including its name. Archaeologists are still trying to understand how its economy functioned, how it interacted with other prehistoric cultures, and whether its elites possessed a writing system. “That would solve a long-standing mystery,” says Sun.

There are some clues, however, to why Shimao was abandoned after 500 years. It wasn’t earthquake, flood, or plague. A war might have helped drive them out, but scientists see more evidence that climate change played a pivotal role.

In the third millennium B.C., when Shimao was founded, a relatively warm and wet climate drew an expanding population into the Loess Plateau. Historical records show a rapid shift from 2000 to 1700 B.C. to a drier and cooler climate. Lakes dried up, forests disappeared, deserts encroached, and the people of Shimao migrated to parts unknown.

The once-distant tongue of the Ordos Desert now laps at the banks of the Tuwei River, just below the entrance to Shimao. The ancient site is shrouded in dust and rocks and silence. Yet, after 4,300 years, one of the world’s oldest cities is no longer lost to history, no longer abandoned. Its stones have given up a precious load of secrets, challenging our understanding of the earliest period of Chinese civilization. Many more revelations are sure to come.

If You Trust People Like Mark Zuckerberg, Watch The Social Dilemma Now

Before plants or animals existed, this 250,000-ton rock fell in the mud. Here’s…