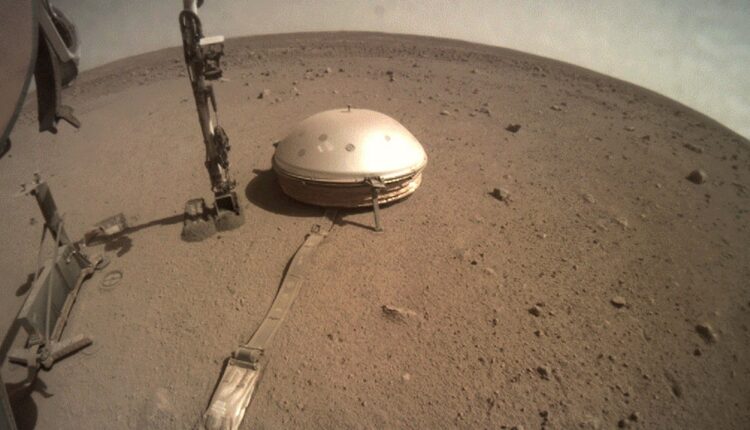 The solar system’s god of war has a bigger heart than expected: Using humankind’s first seismometer on another planet, researchers have analyzed the interior structure of Mars for the first time, including its oversize liquid core.

The findings, published on July 22 across three studies in the journal Science, mark the latest scientific triumph for NASA’s InSight lander, which arrived at the flat equatorial plain known as Elysium Planitia in November 2018. The stationary spacecraft has measured faint “marsquakes” rumbling through the planet since early 2019.

On Earth, seismic waves can reveal our planet’s inner structure by revealing boundaries deep underground where the waves’ speeds and directions change. InSight’s similar measurements of Martian temblors have let scientists detect distinct layers within the red planet, including the boundary of its roughly 2,300-mile-wide core.

“As a seismologist, you probably have one chance in your life to find a core for a planet,” says InSight team member Simon Stähler, a planetary seismologist at the research university ETH Zurich in Switzerland, interviewed by video call.

Mars is just the third celestial body to have its core directly measured with seismic data, following Earth in the early 1900s and the moon in 2011. When combined with InSight’s first measurements of Mars’s mantle and crust structure, the core size will refine models for how Mars formed and changed over the past 4.5 billion years, from a possibly habitable world with liquid water and a planet-wide magnetic field to the hostile, rusty desert it is today. (Read more about humankind’s long-lasting obsession with Mars in National Geographic magazine.)

Past Mars missions and computer models had made many solid estimates of what lay beneath Mars’s ochre surface, including the notion that it likely had a liquid core. But without direct seismic data, researchers couldn’t confirm how accurate their models were—or see whether Mars had any surprises waiting for them. InSight’s results provide a check on how Mars has changed over eons. But they also offer a unique chance to test how well scientists can tell what lies in a planet’s heart from afar.

“This is the first time we have observations from inside another planet,” says Sanne Cottaar, a seismologist at the U.K.’s University of Cambridge who wasn’t involved with the three studies, interviewed by video call.

Teasing out results from InSight’s data represents a major analytical feat. On Earth, seismology is performed with networks of tens of thousands of sensors. InSight scientists had a single seismometer, in a single location, with which to peer into the red planet’s interior. (See how NASA’s newest rover, Perseverance, will explore the Martian surface.)

Upping the difficulty, Mars is deathly still compared to Earth. Mars’s biggest tremors would barely register to people on the surface unless they were standing within a couple miles of the epicenter of a quake. But InSight is extremely sensitive, and the seismic quiet of Mars means the spacecraft could detect weak tremors at larger distances than a similar instrument would on Earth. Even so, scientists have had to contend with many possible sources of noise, including surface winds, dust devils, and “glitches” caused by InSight’s creaking, popping structure as it heats up and cools down with each Martian day.

“With the great team we’ve got, we were able to dig out all of the information that we wanted to from the data that we did get and that we’re still getting,” says Mark Panning, a seismologist at NASA’s Jet Propulsion Laboratory in Pasadena, California, who co-authored the studies.

The bread and butter for marsquake researchers would be familiar to any seismologist on Earth: P-waves and S-waves, two types of seismic waves that wriggle through a planet’s interior.

Like sound waves moving in air or water, P-waves compress particles along their paths. S-waves move more slowly than P-waves, and as they course through a material, they shake the particles side to side, like the strings of a freshly strummed guitar.

Because they move in different ways, P- and S-waves don’t pass through the same kinds of materials, giving scientists major clues to planets’ interiors. P-waves can pass through solids, fluids, and gases without problems, but S-waves can move only through solids, since solids alone resist side-to-side shearing.

This difference proved key to detecting Mars’s core, since P-waves can pass through a solid mantle and into a liquid core, but S-waves can’t. Depending on the orientation of their side-to-side shaking, some S-waves can even descend to the core-mantle boundary, reflect off it without losing energy, and bounce upward toward the surface.

Stähler and his InSight colleagues were on the hunt for precisely these types of seismic reflections. After detecting curious hints in data from a July 2019 marsquake, Stähler and a growing team of InSight scientists searched for marsquakes that had arrived in three distinct phases: the P-wave, followed by the main S-wave, and a second, smaller S-wave a few hundred seconds later with the correct orientation to be a reflection.

In all, the team found six marsquakes that showed this three-part pattern. When they compared the signals against 5,000 different models of Mars’s mantle, researchers found that these waves must be bouncing off a boundary about a thousand miles beneath the red planet’s surface: the dividing line between Mars’s solid mantle and its liquid core.

Based on the depth of the core-mantle boundary, the InSight team estimates that Mars’s core is between 2,230 and 2,320 miles (3,580 and 3,740 kilometers) wide, slightly bigger than scientists had expected. The core’s size also means its average density is slightly lower than once thought. If certain reasonable assumptions about Mars’s makeup hold, the liquid iron-nickel core must contain 10 to 15 percent sulfur by weight, as well as dashes of lighter elements such as oxygen, hydrogen, and carbon.

The findings also make clear that Mars’s mantle doesn’t reach the depths and pressures needed to make a distinct lower mantle, the type of geologic layer that within Earth is a hot, dense region of solid rock that begins some 410 miles (660 kilometers) beneath our planet’s surface. The high-pressure minerals found in Earth’s lower mantle help insulate our planet’s core, so the lack of one on Mars likely means that its core had a much easier time cooling off.

Depending on what the core is made of, this potential for rapid cooling may have helped heat move through Mars’s core during the planet’s early history, generating the kinds of convection currents that would have created a planet-wide magnetic field in its youth.

Though Mars lacks such a magnetic field today, the crust of the southern hemisphere is strongly magnetized, which implies that the red planet had an Earth-like magnetic field between 3.7 billion and 4.5 billion years ago and then lost it. The death of Mars’s magnetic field has been linked to the loss of much of its atmosphere, so pinning down more details of the field’s demise may help scientists understand when and why Mars became the dry, seemingly barren world it is today.

What Mars is really made of

InSight’s marsquakes not only revealed the red planet’s core; they also gave hints of Mars’s shallower underworlds, the mantle and crust. For the first time, scientists can see these layers of Mars’s interior as we have on Earth.

In another study also published on July 22 in Science, a team led by ETH Zurich geophysicist Amir Khan used marsquake data to detect a distinct thermal break in the planet’s interior about 250 to 370 miles (400 to 600 kilometers) down. Above that depth, the crust and uppermost part of the mantle conduct heat together as a stable shell called a thermal lithosphere. Beyond that depth, the mantle behaves more like a viscous fluid, convecting heat slowly like a lava lamp.

The modeling also suggests that Mars’s lower crust is far more enriched with radioactive, heat-producing elements—13 to 21 times more—than the mantle beneath. Together, the results could help explain why its volcanoes show up at where they do despite the planet’s lack of global plate tectonics.

Completing Mars’s cutaway, researchers also zoomed in on the structure of Mars’s crust, in a third paper published on July 22 in Science. The study’s results permit two different interpretations: The crust is either roughly 12 miles (20 kilometers) thick, consisting of two layers, or roughly 24 miles (39 kilometers thick), consisting of three layers. Figuring out which is correct should help scientists understand how the planet formed and changed over time.

“We still hope with more data or more different analysis [that] we will get to the point that you can single out one of these” scenarios, says Brigitte Knapmeyer-Endrun of Germany’s University of Cologne, who led the crustal structure study with JPL’s Mark Panning.

However, Mars’s large core could make picking up certain types of intriguing quakes that much harder. Among the most seismically promising places on Mars is its dramatic Tharsis region, which is home to Olympus Mons and other massive, dormant volcanoes, as well as geologically young-looking fissures and faults. Mars’s core is big enough to block Tharsis’s S-waves from making their way to InSight, preventing the spacecraft from detecting any marsquakes occurring there.

Perhaps more seismic surprises lie elsewhere on Mars. InSight is still collecting data, and with the mission extended through late 2022, researchers expect to see more tremors—and more direct glimpses into the red planet’s big metallic heart beyond what we could glean from orbit.

“We’re really going beyond interpreting the interior of the planet purely from space,” Stähler says. “We really have a ground-truth now.”

A Photographer Gives An Inside Look At The Fall Of Kabul, Her Longtime Home

Biggest U.S. earthquake in more than 50 years strikes Alaska—here’s what we can learn

Why the U.S. once set off a nuclear bomb in space

Heads up! The cardiovascular secrets of giraffes

Genetic tricks of the longest-lived animals