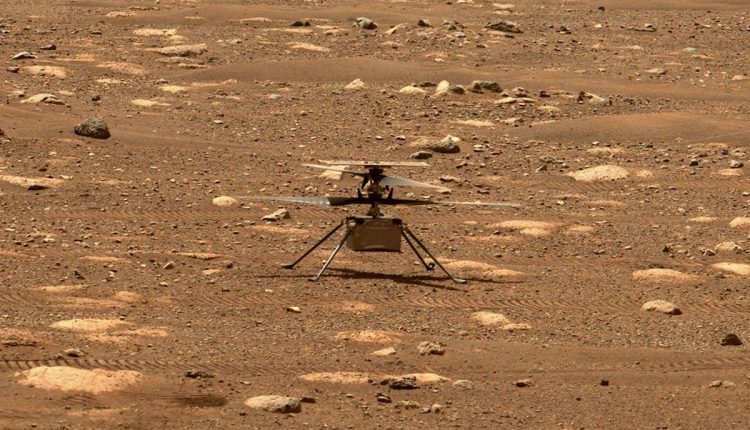 NASA is nearly ready to attempt the first flight on another planet. The space agency’s small helicopter, called Ingenuity, has been deposited in a flat area on Mars, and it is running through a series of final tests before it tries to lift into the thin Martian air.

Ingenuity’s first flight was originally slated for April 11, but the mission hit a snag during a pre-flight test. While trying to spin the helicopter’s rotors at full speed without leaving the ground, Ingenuity’s onboard computer ended the test early. NASA says the helicopter is safe and communicating with Earth. The team plans to update the software on the helicopter and “will set a flight date next week,” according to a NASA status update.

Flying on Mars is incredibly challenging because of the planet’s wispy atmosphere, which is equivalent to an altitude of about 100,000 feet on Earth—much higher than even the most capable helicopters can fly. The highest helicopter flight in history occurred in 1972, when French aviator Jean Boulet flew to 40,820 feet at an airbase northwest of Marseille.

During its first flight, Ingenuity will ascend to about 10 feet, hover and turn slightly, then touch back down. The trip will last just 30 seconds, but if it’s successful, Ingenuity will open up new opportunities for exploring other worlds, says MiMi Aung, the Ingenuity project manager at NASA’s Jet Propulsion Laboratory.

NASA hopes that the 19-inch-tall helicopter will pave the way for bigger rotorcraft on Mars, allowing scientists to study the red planet from a new perspective. Spacecraft orbiting Mars give a global sense of the planet’s structure and geologic features, while landers and rovers on the surface provide an up-close look at the minerals and rock layers that hold clues about the planet’s history.

Helicopters on Mars would be able to study entire craters, canyons, and mountains in much more detail than orbiters, says Matt Shindell, a curator of planetary science and exploration at the Smithsonian’s National Air and Space Museum (NASM). They could also reach locations such as canyon walls or volcanic slopes that a rover could never visit.

“What a helicopter would potentially do is bridge the difference between that orbital perspective and the ground perspective, to where we could now get a little bit more of a sense of Mars regionally,” Shindell says.

A future flying machine could also be used as “a scout for rover missions, to overlook a horizon to plan out where to drive,” adds Steve Jurczyk, NASA’s acting administrator. “Eventually for human missions to Mars, it could be a scout for the astronauts.”

Where air is thin and nights are cold

NASA’s Perseverance rover deposited Ingenuity on the surface after it successfully landed on Mars on February 18. The rover is now serving as a communications relay for the helicopter’s test flight.

The flight attempt is risky because Mars’s thin air makes it much harder to use rotor blades, like those on a helicopter, to achieve controlled flight. If something goes wrong—a sensor malfunctions or an unexpectedly strong gust of wind hits Ingenuity—the craft could come crashing to the ground.

Some early ideas for a Martian helicopter were studied in the 1990s, but it took another couple decades before the required technology was advanced enough to actually fly a prototype in a vacuum chamber on Earth. Batteries had to become more efficient, computers had to get smaller, and lightweight composite materials had to be developed for the helicopter’s rotors.

Ingenuity will spin those four-foot-wide rotors up to a frenzied speed of about 2,500 rotations per minute. It needs to autonomously control its rotors very quickly to remain stable in the air, using a tiny computer similar to a smartphone’s electronics, as well as technology developed for self-driving cars.

In between flights, the small helicopter has to contend with nighttime temperatures that plummet as low as -130°F. A small solar panel specially tuned to the amount of sunlight available on Mars feeds batteries that power the helicopter’s motors and run a heater to keep the craft warm at night.

When they’re ready to try again, the team plans to fly Ingenuity around midafternoon, local Mars time. Flying in the middle of the afternoon will allow the helicopter’s solar panel to charge its batteries before and after the flight, so the batteries still have some juice to run the heater before Ingenuity has to survive another frigid night.

NASA will also be monitoring wind gusts with an instrument on the Perseverance rover to determine the best time to fly.

“Ingenuity has been tested in simulated winds, using computer models as well as a big ‘wind-wall’ the team built in one of our test chambers at JPL,” Bob Balaram, chief engineer of Ingenuity, wrote in a status update ahead of the first flight. “However, we can’t test over the entire range of wind conditions that one might experience on Mars.”

As a token of the flight’s historic nature, Ingenuity carries a postage-stamp-size piece of fabric from the original Wright Flyer, which carried Orville Wright on the first powered flight of a heavier-than-air aircraft in 1903. That flight over the hills of Kitty Hawk, North Carolina, lasted only 12 seconds.

“The Wright brothers are my motivation,” JPL’s Aung says. Before their flight, “a lot of people had partial tests, partial success, you know, theoretical predictions, analytics predictions, some might even have had philosophical predictions” for how to fly an airplane. “But at some point,” Aung says, “you just have to have the guts.”