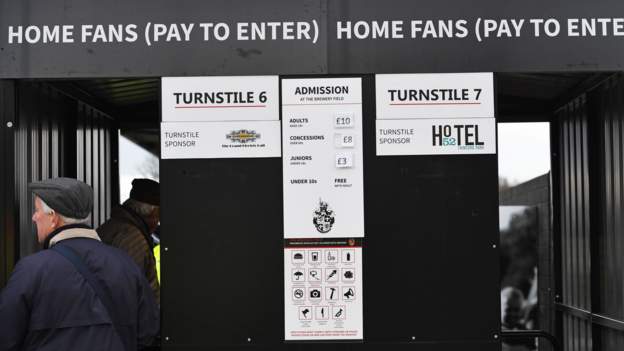 National League North and South seasons null and void: ‘It’s a bit of a nightmare’

That was the immediate reaction from Maidstone United chairman Oliver Ash on Thursday evening when it emerged that clubs in the National League North and South had resolved to declare their respective seasons null and void.

The National League meanwhile will complete its campaign despite seven out of the 23 clubs voting to end the season.

But in the tier below, the majority were clear they could not carry on amid an absence of grant funding and ongoing uncertainty surrounding the lifting of lockdown restrictions.

“This situation is going to go on and I’m not sure how it’s going to finish.

One of those to have already indicated their disquiet are Gloucester City, leaders of National League North.

Co-chairman Alex Petheram tweeted notice of their intention to begin legal action against Thursday’s resolution to null and void the season, which still requires ratification from the Football Association.

Decisions over promotion and relegation between the National League tiers and the English Football League will also need to be finalised.

Petheram, whose club were five points clear at the top but had played three more games than second-placed AFC Fylde, wants to see promotion and relegation retained.

Maidstone, meanwhile, are mid-table in National League South, but had played as many as six fewer matches than some other clubs because of the effects of the coronavirus pandemic.

Maidstone United last played against Hornchurch in the FA Trophy on 6 FebruaryAsh revealed the season curtailment will see them mothball the club’s football operations until cleared to restart, while players and coaching staff will be placed on furlough indefinitely.

“There will be a lot of reflection to come out of this whole process,” he said.

“The big question will be: ‘Was this vote really necessary? Was this the only solution?’

“There should have been more involvement with the clubs, with the chairmen and more transparency from the league to give us more of a chance at finding a better solution.”

Many clubs in the North and South divisions admitted the lack of grant funding since 31 December had left them in a dangerous financial position.

The offer to take out low-interest loans in the absence of more grants was out of the question for many.

Chippenham Town chairman Neil Blackmore, speaking before Thursday’s resolution was passed, said he was unprepared to put the club into debt just to finish the season.

“We’ve got no opportunity to pay those debts off at the minute because we can’t have fans in,” he told BBC Radio Wiltshire.

“The funding we had from the National Lottery before Christmas, we didn’t make any money out of it. The directors still had to put money towards it to keep the club running, but it was a great help.

“But we needed to keep on going with that until we could get fans back in.”

The former Eastleigh and Sutton United boss believes a restructure below the National League is the way ahead.

“It needs looking at as, in my opinion, the North and South divisions have been treated like the very, very poor cousins,” he told the 72+ Podcast.

“You’ve got some big clubs in those two divisions, like York City and Maidstone, teams that were getting bigger crowds than some League Two clubs.

“Yet some other clubs, who were getting paying crowds of no more than 400-500 people, were being handed treble the amount in grant funding earlier this season.

“The way to do it is to bring back local derbies and bigger crowds for next season, dramatically reduce travelling costs,” he said.

“You could probably regionalise the National League South into a Premier Division of 24 teams and vice-versa for the North.

“That would give teams at least a couple of years to recover their finances. Why spend about £6,000 to travel to Halifax on a Tuesday night? That’s what it costs in this current climate.

“The pandemic has changed everything. I just hope that the people in charge can have some forethought and change things because clubs will really struggle.”

Meanwhile, for players and coaching staff, news of a resolution has brought relief, even if they voted against it.

Concord Rangers reached the first round of the FA Cup this season, where they lost to League Two side Stevenage on penaltiesConcord were just two points above the relegation place in National League South but were among a number of clubs in the division who refused to continue playing while uncertainty was in place around funding and Covid-19 testing.

“The mental toughness side of not knowing whether you’re in, you’re out, whether you’re playing or not, has been really difficult for us as a management group,” Scopes added.

“I’m quite relieved we’ve got a decision, whether or not it’s the right or wrong decision, as we can just look to plan and come back again stronger next season.”