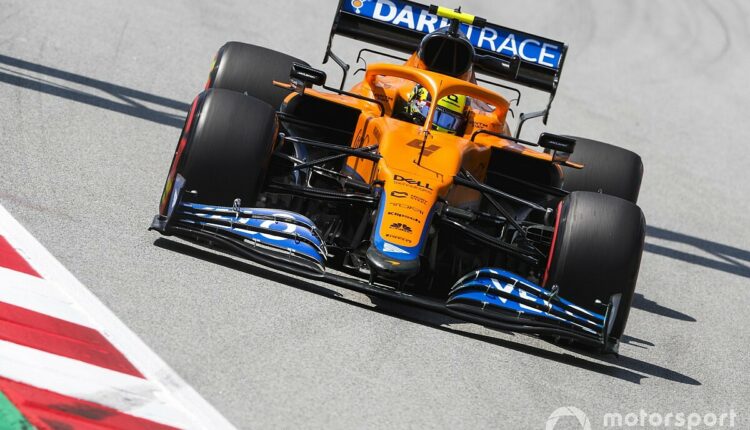 The Briton has had a strong start to the 2021 Formula 1 season, and is currently fourth in the drivers’ standings, having taken a podium finish at the Emilia Romagna Grand Prix.

However, his qualifying sessions have not played out in an ideal fashion, as he has often been unable to match his best time from Q2 in the final run of Q3 that secures the grid slots.

In three of the four grands prix so far this season, Norris’ fastest lap has come in the Q2 session.

But while the laptimes suggest a pattern could be emerging, Norris is clear that a mixture of circumstances and events beyond his control have skewed the picture.

“I don’t think my qualifyings have been too bad,” said Norris, speaking at the reveal of McLaren’s new Gulf livery for the Monaco Grand Prix.

“Q1s and Q2s have been very good, and Q3 run one has often been very good. But then Q3 run two is often where it’s gone a little bit downhill, but all for kind of different reasons.

“It’s not because I’ve not been able to put laps in or put it together or anything like that. In Spain I had damage on the car. In Imola it was for going off the track. Portugal was going too early and getting caught behind the Aston Martin.

“So all of them have been a bit different. I’m not too worried about that.

“If it was something that became consistent and started repeating itself in Q3, then I would think there’s a clear thing to work on. But at the moment, it’s always been a different reason.

“And Q1 and Q2 have always gone very well. So I still have the confidence to put it together in Q3.”

Norris said that the Spanish GP issue that held him back in his final Q3 attempt was the result of floor damage that he picked up on his first run on old tyres.

“I ran wide between Turn 8 and 9 on run one, which was unluckily on a relatively new tyre. Then on the new tyre, the damage kind of cost me a bit, so it wasn’t ideal.”