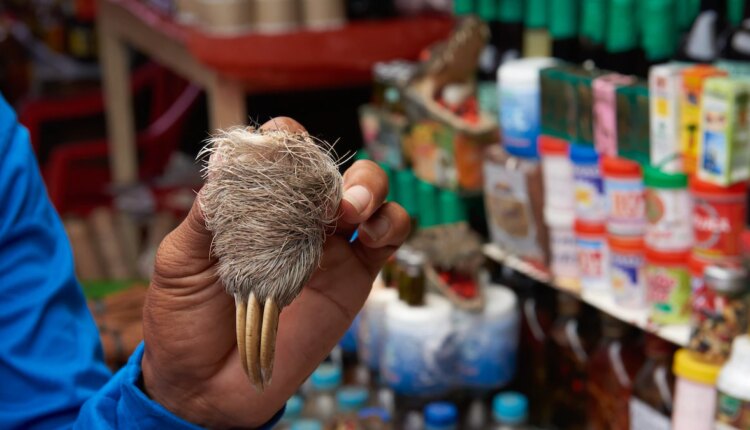 Notorious wildlife market, largest in Peruvian Amazon, back in business after pandemic hiatus

At booths lining the walkways, sloth paws are stored in jars next to dried herbs, and yellow-footed turtle meat lies alongside chicken breasts. A leopard skin drapes above a stall, like a rug drying on a laundry rack. Handicrafts sit atop tables in rows, as do bottles of pink dolphin genitalia. Parakeets for sale as pets hop in small cages. Fish, sliced open but still alive, writhe in buckets.

This is the scene in October 2019 at Belén Market, a sprawling outdoor bazaar in the heart of the Peruvian Amazon where more than 200 species of wild animals—living and dead—were illegally for sale.

Two months later, on the other side of the world, a novel coronavirus broke out in China at another market, at Wuhan, where wild animals were sold.

In January 2020, as COVID-19 was becoming a global pandemic, China banned the farming, sale, and consumption of wild animals and their parts. The Wuhan market was boarded up. Three months after that, the World Health Organization, the World Organization for Animal Health, and the United Nations Environment Programme issued guidance calling for, among other regulations, the shutdown of marketplaces selling live, wild-caught mammals.

COVID-19 has thrown into sharp relief the connection between the wildlife trade and zoonotic diseases—those that make the leap from animals to humans. Some 70 percent of diseases are zoonotic—everything from HIV and MERS to Ebola and SARS. To date, COVID-19 has killed an estimated 4.5 million people worldwide and sickened 215 million more.

Yet despite the urgings from international institutions, it’s unclear whether this deadly new virus has slowed the buying and selling of wild animals or spurred those who engage in the trade to change their practices. Belén Market presents a case study in just how stubbornly the illicit wildlife economy can persist.

The 16-acre market is in Iquitos, on a tributary of the Amazon—the largest city in the Peruvian Amazon and the largest in the world that can’t be reached by land. Nevertheless, when the coronavirus arrived, by river or air, it hit Iquitos hard, likely infecting at least 70 percent of city residents—among the highest infection rates in the world—and crippling the health care system.

Belén Market, a critical node of commerce in the Amazon, was a clear vector of transmission: Of 100 Belén vendors tested in May 2020, 99 were positive for COVID-19, Peru’s then president, Martín Vizcarra said.

That month, the city government shut down Belén Market, bulldozing the nearly 2,500 stalls. The closure coincided with a plan, five years in the works, to modernize the market, with financial backing from the United Nations Development Programme. The overhaul was intended to promote economic development and better living conditions in a long-marginalized part of the country. One immediate effect Peru’s Ministry of Production and UN backers envisioned: It would reduce the spread of COVID-19.

This summer, following months of construction, the market reopened. But an eight-week investigation in August and September by World Animal Protection, an international animal welfare nonprofit, revealed that the illegal selling of wild animals and their parts has resumed in much of the market.

“It’s a real concern that such a prominent—and some would say notorious—wildlife market like Belén that was already on the radar of UN agencies in terms of requiring aid and development support has been allowed to reopen without steps being taken to address the illegal wildlife trade,” D’Cruze says. It was a “missed opportunity.”

Officials from the United Nations Development Programme and from Peru’s Ministory of Production, which funded and oversaw the redevelopment, did not respond to requests for comment.

Iquitos lies about 230 miles up the Amazon River from Très Fronteras—the region where Brazil, Colombia, and Peru meet and where the illegal wildlife trade flourishes virtually unchecked.

Hunting wild animals for subsistence, common in Indigenous Amazonian communities, is legal in Peru, but selling those animals in markets is not. Yet hunters in river communities often take animals or their parts to vendors at Belén. Wild animal meat—such as caiman, paca (a large rodent), and collared peccary, a pig-like mammal—is widely available there. Live animals also are sold for pets or for food. People buy live yellow-footed turtles, for example, and slaughter them later. Animal parts—jaguar teeth, sloth claws, pink dolphin genitalia—are sold for use in traditional medicine, domestically and internationally, or as luxury souvenirs.

“To be honest, we lack logistical support in every way,” says Ramos Acari, an officer with the environmental police of Loreto province, a division of the National Police of Peru. The agency, based on Iquitos, is responsible for policing all of Loreto—Peru’s largest province, encompassing nearly a third of the country. Although for security reasons, Acari declines to give the number of officers responsible for monitoring the wildlife trade, he acknowledges that it’s a “small group.”

According to Acari, the illicit trade in wild animals in Belén Market persists mostly in the areas closest to the Itaya River. He says his team has limited resources and that they do what they can to stop the trade, but if “we had more support, we could reach everything in Loreto.”

A major challenge is how entrenched the wildlife trade remains. “It is very hard work trying to make people [care] for nature,” he says. Of nearly 100 vendors in Belén who sell wild animals or their parts, World Animal Protection found that on average they’ve been doing so for around 16 years.

Since the pandemic began, the wildlife trade has intensified beyond Belén, says biologist Javier Velásquez Varela, founder of the Amazon Rescue Center, a wildlife rescue and rehabilitation facility in Iquitos. “The pandemic has greatly reactivated the sale of wildlife as a pet,” he says, noting that people in many communities economically devastated by the pandemic began to hunt animals for pets. “Now they’re sold in each port of hundreds of communities throughout the Amazon,” he says.

International demand, notably from China for jaguar skins and teeth, continues to fuel a flourishing trade in the Peruvian Amazon, according to a recent Convoca investigation, with vendors getting high prices from influential consumers and traders. This complicates enforcement, D’Cruze says. A source country such as Peru can do all it can to protect its wild animals, but those efforts “need to be extended to the big, influential consumer countries” as well.

A ‘cauldron of contagion’

World Animal Protection and other organizations emphasize the importance of the animal welfare and conservation dimensions of the wildlife trade. But Christian Walzer, chief global veterinarian at the U.S.-based Wildlife Conservation Society, calls open-air markets a “cauldron of contagion.”

In Belén and other markets that sell live wild animals, many arrive stressed, injured, in dirty cages, and with compromised immune systems, D’Cruze says. When dozens of animal species are sold in close proximity, conditions are ripe for viruses to flourish, potentially allowing new strains to develop.

Wild animals can carry viruses that “in a normal world would not come into contact with humans,” Walzer says. The animals carrying these viruses aren’t necessarily sick from them—they’re simply “silent reservoirs.”

The meat of pacas, known as majás in the Amazon, which are native to South America, is some of the most available in Belén Market. A study of paca meat sold there found 25 strains of salmonella in 72 samples collected in July 2019; 40  percent of the strains were resistant to multiple antibiotics.

World Animal Protection’s investigation found no evidence that the plan to overhaul Belén Market involved clamping down on the wildlife trade, despite mounting concerns about the risk of disease spread caused by the wildlife trade and the fact that improving health conditions was a key goal.

Elizabeth Maruma Mrema, the acting executive secretary of the United Nations Convention on Biological Diversity, a multilateral conservation treaty, said in April 2020 that reducing the number of live animals in food markets has “the potential to significantly reduce the risk of future disease outbreaks.” She added that “stricter controls on the sale and consumption of wild species must be scaled up globally.”

For enforcement to be effective locally, D’Cruze says, it will take political will, funding, and more staff, as well as educational efforts targeting vendors and shoppers about the law and the health risks of the wildlife trade. Warning signs in Belén Market would be a start, he says. And more resources would need to be devoted to caring for rescued wildlife.

That even the UN-backed opportunity for Belén to start over has failed to extirpate the local wildlife trade illustrates the immense challenge of scaling up globally. “Even within Peru alone,” D’Cruze says, Belén is “not the only market, and we shouldn’t fool ourselves for a second that this is unique to South America.” Wildlife markets play a similar role across Africa and Asia.

As we look to a post-COVID future, he says, it would be a misstep to focus “purely on rebuilding without looking at ongoing risks.”

The Untold, Dramatic Story Behind The Discovery Of America’s First Murder…