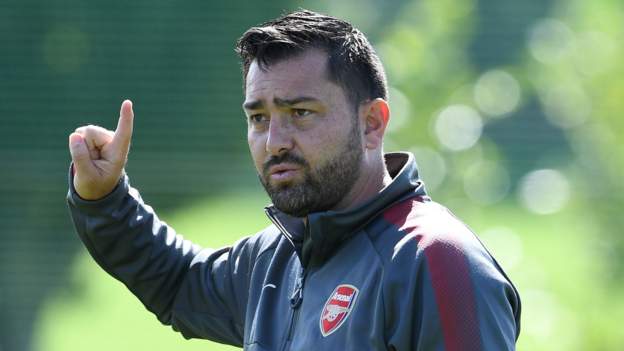 The Spaniard, 45, won trophies with Rayo Vallecano and Arsenal before joining Bordeaux in 2019.

“I am excited, very proud and honoured. It’s a privilege for me, it’s something I’ve wanted to do for many years. To represent a team like Scotland, the challenge to bring the team to the next level.”

Martinez Losa said he has wanted to manage Scotland ever since his days at Arsenal, when he worked with the likes of current national team stars Kim Little, Lisa Evans, Caroline Weir and Emma Mitchell.

“I’ve worked with many of the players already,” he added. “I know they want success. It’s a big challenge to compete in the World Cup and the Euros and make the country proud of what we can do in the women’s game.

“I really enjoyed the character and the mindset of the players. I always said to my staff that in future I would really love to coach the Scottish national team because the opportunities and the possibilities that this team has.”

The Scots open their World Cup qualifying campaign in the autumn, when they travel to face Hungary on 17 September and host Faroe Islands four days later.

Kerr’s side featured at the last World Cup in 2019, two years after Scotland made their major women’s finals debut at Euro 2017 under Anna Signeul.

Who is Martinez Losa?The Spaniard has coaching experience from his homeland, England, the United States and currently France.

He replaced Kerr as Arsenal manager in 2014 after a spell as assistant head coach with Western New York Flash, and won the 2015 WSL Cup and the FA Cup the following year.

In his first season, they achieved their best top-division finish of third place and repeated the feat the following year to qualify for the Champions League for the first time.

Gold Rush: How Britain’s Olympic dreams were rebuilt after a disappointing 1996An exclusive BBC News special: Dominic Cummings is interviewed on his role in Brexit, the pandemic and the government