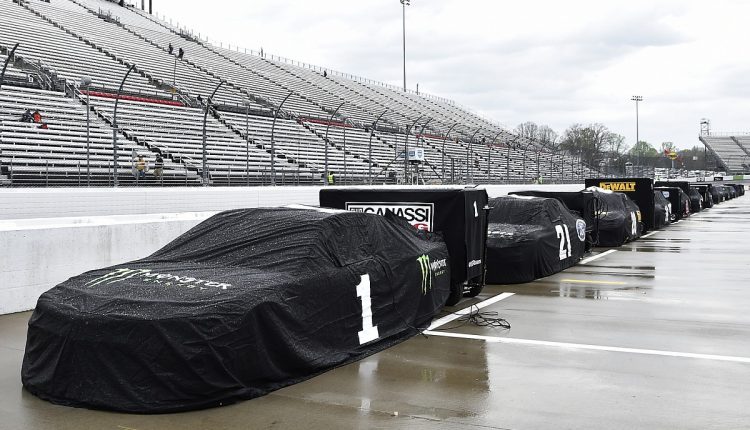 Due to persistent rain showers and thunderstorms, Saturday night’s Cup Series race at Martinsville was halted after 42 laps and has been postponed until 4 p.m. ET Sunday. The race will be broadcast live on Fox Sports 1.

In addition, the remainder of Friday night’s Xfinity Series race will run at noon ET Sunday and broadcast live on Fox Sports 1. The race was halted Friday night 29 laps short of the finish of Stage 2 due to rain.

When the Cup race was halted, Denny Hamlin was the leader followed by Joey Logano, Ryan Blaney, Martin Truex Jr. and Chase Elliott.

When the Xfinity Series race was halted, Brandon Jones was the leader followed by Josh Berry, Daniel Hemric, Brett Moffitt and Jeb Burton.

During Cup Series inspection on Saturday afternoon, Daniel Suarez’s crew chief, Travis Mack, was ejected from the track after the Suarez’s No. 99 Chevrolet was found to have added ballast outside of the approved container.

The team also lost 10 driver and owner points and Suarez had to start at the rear of the field.

Also starting from the rear of the field was Corey LaJoie, Justin Haley and James Davison – all for multiple inspection failures – and Tyler Reddick for unapproved adjustments to his No. 8 Chevrolet.

Following a lengthy delay, NASCAR started the race although bad weather remained in the area. Hamlin took an early lead from pole-sitter Logano and led the way until James Davison spun in Turn 4, which brought out a caution. During the caution, the rain picked up and NASCAR ultimately postponed the remainder of the race.