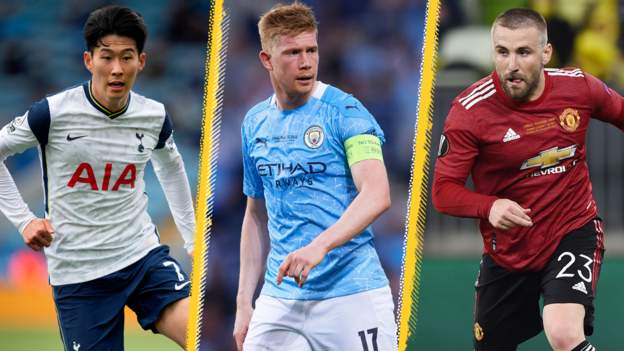 Manchester United’s Luke Shaw and Tottenham’s Son Heung-min are in a 2020-21 PFA Premier League Team of the Year dominated by Manchester City .

Tottenham’s Harry Kane and Liverpool’s Mohamed Salah, who scored 23 and 22 league goals respectively, are in.

Despite winning the Champions League – as well as reaching the FA Cup final and finishing fourth in the Premier League – no Chelsea players are included.

Manchester City won the 2020-21 Premier League with a 12-point cushionThere is no room for City midfielder Phil Foden, 21, who made 50 appearances in all competitions in 2020-21, helping the club win the Premier League and Carabao Cup, and reach the Champions League final.

The PFA Team of the Year was voted for by members of the Professional Footballers’ Association, the players’ union.

Belgium midfielder De Bruyne is the only player to retain his place from the team of 2019-20.

Joao Cancelo joined City from Juventus for £60m in August 2019Did you know? Portugal full-back Cancelo, 27, created 1.6 chances per 90 minutes in open play in the 2020-21 Premier League season, the best return from a defender with at least 15 appearances to their name.

John Stones made 22 Premier League starts in 2020-21, scoring four goalsDid you know? Manchester City conceded only 12 goals in the 1,934 minutes that England defender Stones, 27, featured in the Premier League, conceding once every 161 with him on the pitch, the best rate of any player in the squad.

Ruben Dias joined City from Benfica in September 2020 for £65mDid you know? Manchester City conceded 0.7 goals per game in the 32 Premier League matches Portugal defender Dias, 24, played in, compared to 1.8 goals conceded per game in the six matches he missed.

Luke Shaw, right, has been at United for seven seasonsDid you know? England defender Shaw, 25, created 72 chances for Manchester United in the Premier League in 2020-21 – the second-most of any defender in the division, after Liverpool’s Trent Alexander-Arnold (77).

Bruno Fernandes has yet to win a trophy at United since joining from Sporting Lisbon in January 2020Did you know? Portugal’s Fernandes, 26, scored 18 goals and made 12 assists in the Premier League in 2020-21 – his 30 combined goals and assists was the most by a Manchester United player in a league campaign since Robin van Persie in 2012-13.

Harry Kane has scored 166 goals in 245 Premier League appearancesDid you know? The England captain, 27, was directly involved in 37 goals in the Premier League in 2020-21 (23 goals, 14 assists), at least seven more than any other player in the competition (Bruno Fernandes, 30).

Tottenham signed Son Heung-min from German club Bayer Leverkusen in 2015Did you know? South Korea forward Son, 28, netted nine goals after travelling five or more metres in possession of the ball in the Premier League in 2020-21 – the most of any player.

Cristiano Ronaldo: How did he become the world’s biggest one-man football brand?When I Was 25: Olympian Dame Kelly Holmes opens up about about some incredibly difficult decisions