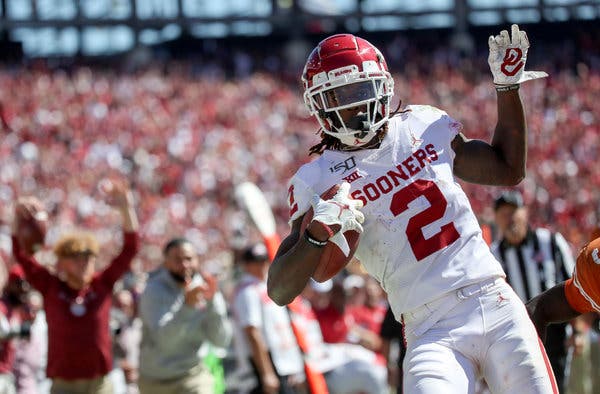 Read the Polls. Debate Them. Definitely Don’t Count on Them.

The first College Football Playoff ranking is still three weeks away. Players and coaches say the other polls are intriguing, but mostly potentially season-crippling distractions.

DALLAS — Around the time the University of Oklahoma’s spirit squad, the Ruf/Neks, fired its shotguns, it was possible to catch the hoarsely hollered words of two men clad in crimson and cream.

“Hey, Georgia lost!” one shouted as he raised his phone and Oklahoma celebrated the No. 6 Sooners’ win over No. 11 Texas in Saturday’s Red River Showdown.

“They did?” came the reply.

Indeed. But what did that mean for Oklahoma and its fans as they left the Cotton Bowl? Nobody really knows, especially with the first batch of College Football Playoff rankings coming on Nov. 5.

Unranked South Carolina’s double-overtime upset of No. 3 Georgia on Saturday showed how quickly a season’s lifelines can come and go. And Oklahoma, which was ranked fifth in the Associated Press Top 25 poll that was released on Sunday afternoon, may well prove to be another case study in the boomeranging nature of media and coaches’ rankings — and the limits of their influence, especially when the selection committee that picks the teams for the biggest games only starts speaking two-thirds of the way through the season.

“The rankings and all of that are out of our control; we’re not the ones who pick the rankings,” said Pat Fields, a sophomore safety for Oklahoma. “But what we can do every week is try to be dominant — dominate defensively, offensively, on special teams, play our best game every single week, hit our standards every single week and then however things shake out at the end of the year is how it’s going to shake out.”South Carolina Upends No. 3 Georgia in Double OvertimeOct. 12, 2019

Most coaches and players who otherwise deem preplayoff rankings as potentially season-crippling sideshows at least concede that the early polls are handy guides and fabulous fodder for jousting with co-workers, in-laws and fellow sports talk radio callers or barflies.

But Wisconsin, with what fast became the nation’s mightiest defense, had a preseason ranking of No. 19 and has quickly reached No. 6. Michigan did another of its fast fizzling acts, going from No. 7 to as low as 20th and now 16. Georgia, which fell to No. 10, seemed poised for another run for a championship, especially after it outlasted Notre Dame in September. Remember Central Florida?

In interviews across the country, including some in Dallas on Saturday, coaches and players suggested those shifts and the rhythms of rankings during the season increasingly made daily mind-set management at least as crucial as avoiding a false start on fourth-and-short. Daily dissections of polls, they argue, should be left to presidential campaigns, not football teams, even as chatter persists among fans and is amplified on cable television and the internet.

“We’re a team that doesn’t really pay attention to too much outside stuff,” said Creed Humphrey, an offensive lineman for Oklahoma. “Of course, it’s hard — everybody’s got social media and stuff, and they see stuff all the time — but our main focus always has to be on the next opponent.”

With Oklahoma’s most menacing regular-season opponent now defeated, and the buzz around the Sooners certain to grow, the team’s ability to adhere to the philosophy Fields and Humphrey espoused will be tested.

Few programs are as eager for a big breakthrough. Oklahoma, which started this season at No. 4, has reached three semifinal games and lost all of them. It has not played for a national championship since the 2008 season, and it has not won one since the 2000 season. (More broadly, the Big 12 has not had a team win a national title since Texas did it to end the 2005 season.)

This year, Oklahoma’s defense is a far more suffocating unit than its recent predecessors, and it recorded nine sacks on Saturday. The offense, which leads the country at 622 yards per game, is built around Jalen Hurts, the graduate transfer quarterback who played at Alabama and is in contention to become the third straight Sooner to win the Heisman Trophy.

“That’s an extremely talented and well-coached team, led by an exceptional quarterback that had a heck of a day,” Tom Herman, the Texas coach, said, his demeanor mostly downtrodden but maybe also a little awed. “They’re really, really good.”

Up until Saturday afternoon, though, Oklahoma’s résumé looked like that of a formidable team that was also open to castigation for not having faced a serious test. Not one of Oklahoma’s first five opponents was ranked.

For the Sooners, it was just an added bonus that Georgia happened to crumble around the same moment that time expired in Dallas. Fields, the safety, appeared stunned as he learned that the Bulldogs had lost, and he fleetingly weighed how it could change the course of Oklahoma’s season.

“That’s big for us,” he finally said. “But we can’t focus on that too much because we know, realistically, at the end of the day, if we dominate every single game and we win out, we know the likely outcome. We try not to focus on the external too much because it just allows for distractions.”

It was essentially an echo of Noah Burks, an outside linebacker for Wisconsin, late last month.

“There’s been some stuff that we’ve seen on social media that’s kind of added fuel to the fire, but for the most part, we try to be the same team every week,” Burks said.

As the sport prepares for the sixth season of playoff rankings, there is history to show that even surveys conducted around the time of the selection committee’s meetings in suburban Dallas are only so insightful. Consider 2017, when the A.P. poll had Alabama, Georgia, Ohio State and Wisconsin in the top four at the end of October.

Two days later, the first round of playoff rankings favored Georgia, Alabama, Notre Dame and Clemson. Ohio State was No. 6 and Wisconsin stood at No. 9. By the end of the season, Oklahoma was chosen for a semifinal and Notre Dame was No. 14.

Even after this past weekend’s scrambling of the pecking order, expect more shifts, and perhaps many more.

No. 4 Ohio State could face Wisconsin twice, once in late October and again in the Big Ten’s title game. No. 1 Alabama and No. 2 Louisiana State will play in November, and both still have dates with No. 11 Auburn. No. 3 Clemson has to contend with South Carolina. Georgia could still wind up playing for a Southeastern Conference title, where Alabama or L.S.U. might be ripe for an upset. There is a distinct possibility that Texas, now No. 15, and Oklahoma will meet again to determine the Big 12 champion.

And not one of those matchups contemplates the almost entirely unforeseen upsets, like the one South Carolina dealt Georgia.

After all, the rankings now don’t matter much.

How to Convert VOB to MP4 on Mac Easily