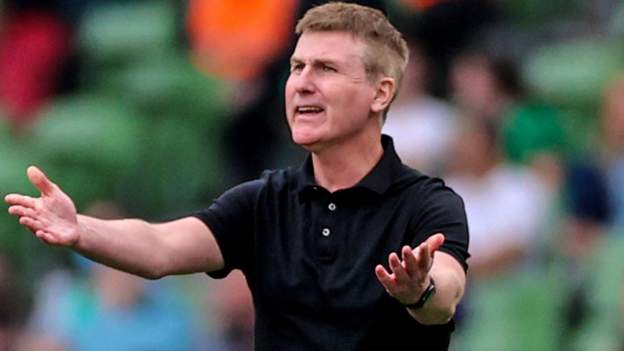 Kenny is without a competitive win in 11 attempts as Republic bossRepublic of Ireland boss Stephen Kenny says his side’s lack of composure in front of goal cost them the chance to kickstart their World Cup qualifying campaign against Azerbaijan.

But Kenny was left frustrated after his players spurned a string of chances.

“We could have had numerous goals today but our finishing wasn’t at the level that it should have been,” he said.

Having suffered late heartache against Portugal in Faro on Wednesday, the Republic came up against significantly more conservative opponents in Azerbaijan, who set up to frustrate the Irish in front of the returning home fans at the Aviva Stadium.

With the visitors getting numbers behind the ball to deny their hosts space, the Republic were forced to attack down the wings as Adam Idah and Jayson Molumby failed to convert Daryl Horgan crosses.

“That meant crosses realistically were a chance of scoring. You can’t play through eight or nine players easily, so sometimes you have to get it wide in that situation and cross it.

“We got the goal like that from Shane Duffy, but we missed a lot of chances from those situations.”

Kenny said his players should have closed Emin Mahmudov down before the Azerbaijan midfielder smashed a fine openerKenny, who noted his side created enough to win the game “probably three or 4-1” also lamented the timing of Azerbaijan’s goal in first-half injury time as a source of frustration after conceding two late strikes against the Portuguese.

He felt his players should have been quicker in closing down Emin Mahmudov before the Azerbaijan midfielder fired a stunning shot into Gavin Bazunu’s top corner.

“It’s a bit of a kick in the teeth to concede the goal on 45 minutes,” added Kenny.

“It’s killing us, conceding the winner in the 95th minute the other night and then the 45th-minute [goal], completely changes the narrative.

“You’re chasing the game and a team are trying to run the down the clock and kill the tempo of the game.

“The players showed a lot of character because they kept going and kept going. We got an equaliser but we just couldn’t get that winner.

“We have to accept that it’s up to us to put the chances away and we didn’t.”

After avoiding an embarrassing defeat, the Republic welcome Group A leaders Serbia to Lansdowne Road on Tuesday as Kenny goes in search of his first competitive win at the 12th attempt.

Nuremberg: The story of how the Nazis’ most notorious war criminals were caughtWhat are the six stages of ghosting? From denial to thirst traps, find out why dating is exhausting