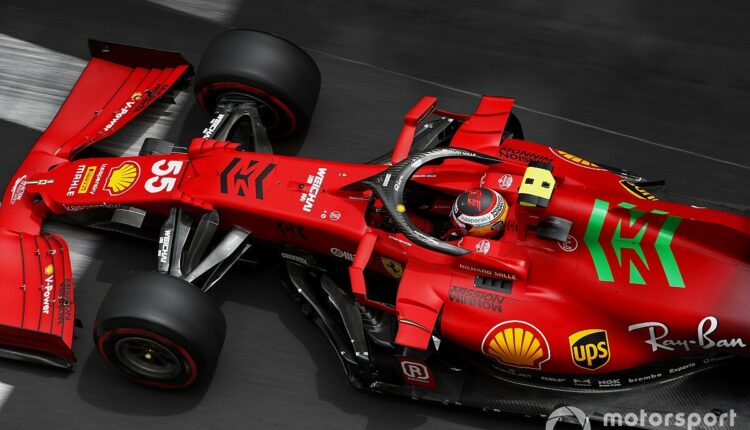 Sainz “not happy at all” to lose Monaco F1 pole opportunity

Leclerc was fastest when he crashed heavily at the exit of the Swimming Pool, bringing out the red flag and ending the final lap efforts of his main rivals, including Sainz.

The Spaniard thus had to settle for fourth place, having shown impressive pace all afternoon and believed before the session that he could take pole.

“It’s a difficult thing to accept, to digest, and it’s not like every day of your life you have the opportunity to put it on pole in Monaco because today I definitely had the pace to do so.

“And you don’t even get the chance to do it, due to the circumstances. So you can imagine that today is a very frustrating day for me.”

Asked how fast his final lap would have been, Sainz insisted that he could have earned pole, despite losing time behind Sergio Perez at the start of the lap.

“Well, first of all run one I lost two or three tenths in the last sector compared to my best lap, so I knew a 1m10.2 or 10.1 with track evolution was there to be had.

“I had a lot of traffic in run two at the beginning of the lap, I had Perez into Turn 1 that didn’t get out of the way, and I already lost a tenth.

“But then I was coming very quick, I was recovering that lap time, and I knew I had all that lap time to come in the last sector, but it was out of Turn 13 that I saw the yellow flag, and I had to abort. I’ve been on it all weekend, I’ve been having the pace to win, to put it on pole.

“I’m starting fourth, so it’s not even not even close to that. I went into quali thinking that a pole position and a win could be possible this weekend, and now I’m lining up fourth, which is very far away from where I think I could have been.”

Sainz added that he was not frustrated that his own teammate had crashed and triggered the red flag that stopped the session.

“I cannot be angry with Charles. We are all here at the limit, we are all pushing these cars like you cannot imagine, we are brushing walls in pretty much every single corner. It’s the fastest cars in history, and these things can happen.

“But the circumstances, I’m just very upset with life, or the circumstances right now, that haven’t given me the opportunity when for the first time that I fight for pole in my life, around Monaco, for Ferrari, I didn’t even get the chance to do the lap.”

Despite his obvious disappointment Sainz conceded that his overall performance thus far this weekend had been positive.

“I’m sure when I digest this weekend and I look back at it, my brain will be much more happy.

“So to have that feeling with a car so early in the season in such a difficult track is something to be proud, because it’s not like the other new drivers to teams are doing that well around here.

“I have to be happy, but my brain right now is not happy at all, because at least top two for the team today was possible.”