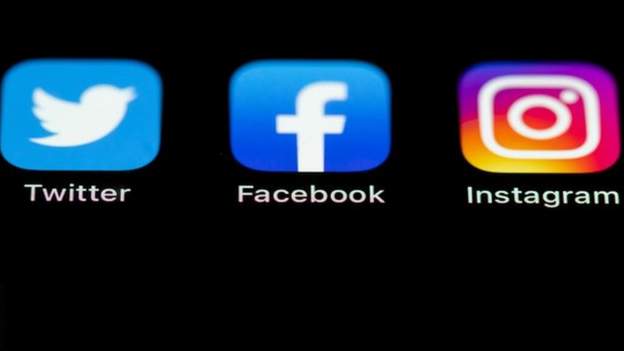 English football and cricket clubs and institutions will boycott Twitter, Facebook and Instagram for four daysFootball clubs, players, athletes and a number of sporting bodies have begun a four-day boycott of social media in an attempt to tackle abuse and discrimination on their platforms.

The “show of solidarity against online abuse” hopes to encourage companies to take a stronger stance against racist and sexist abuse by users.

Premier League managers react to social media blackoutThe Premier League released a statement prior to the four-day silence, saying it would not stop challenging companies “until discriminatory online abuse is removed from our game and wider society”.

“We know that a boycott alone will not eradicate this, which is why we will continue to take proactive steps to call for change,” the statement continued.external-link

A number players posted a statement shortly before the protest began, while football clubs changed their Twitter feed icons to a blacked-out version of their logo.

Is football’s racism battle being lost on social media?Is ending anonymity on social media the answer?Leeds United midfielder Kalvin Phillips wrote: “Disappointed that we even have to be doing this. Social media should be a safe space for everyone.

“I really hope main platforms make it a priority to eradicate online abuse from their system. It’s already a problem in society, let’s do more to stop it online as well.”

Anti-discrimination charity Kick It Out says the boycott “signifies our collective anger”, with football being joined by other sports.

The Duke of Cambridge, who is president of the FA, has also joined, alongside seven-time Formula 1 world champion Lewis Hamilton and Williams driver George Russell.

Formula 1 said it was “wholly committed to combatting any form of discrimination, online or otherwise” and “supports” the sporting bodies and athletes involved in the boycott.

While individual drivers have joined, it is understood Formula 1 is not taking part as it does not experience the same abuse issues on its social media.

The BBC said it could not take part in the campaign because of “special duties that don’t apply to other organisations under our Royal Charter and editorial guidelines that prevent us from joining lobbying campaigns”.

“We will continue to work hard, and publicly, to tackle social media abuse and to expose and challenge racism. And we’ll continue to report extensively on the impact of social media hate – and this weekend’s boycott – across our platforms,” the corporation added.

What have players said?Crystal Palace winger Andros Townsend told BBC Sport players were “starting to fight back”, adding the boycott would “send a warning to these companies that if you don’t start regulating your platforms, it’s going to be an indefinite blackout”.

“For a long time now we’ve all been talking about the impact of social media on the younger generation, as well as mental health,” he said.

“I think the huge part about this is it’s only four days, it could give people a perspective of what life could be like without a huge amount of sporting stars on [social media].”

Deeney added that he receives abuse on a daily basis, which is also aimed at his partner and children.

“That’s very difficult for me to read but also not to react,” he said. “We have to not react, we’re in a privileged position but if we react on a human level, we’re the ones who will get held accountable for our reactions.”

Former West Ham, Sunderland and QPR defender Anton Ferdinand told BBC Radio 5 Live it was “sad” the fight against online abuse had got to this point, but that football was “taking no more of it”.

“There should be life bans, because we’re talking about people’s lives,” he said.

“Some people don’t get out of the slump they’re in after being abused on social media, and that can lead to people harming themselves.

“We’ve got to take this very, very seriously.”

Ferdinand also called on the UK government to do more.

“Has the energy from the government been the same as what it was when the [European] Super League was being spoken about? No it hasn’t, and that’s the disappointing thing,” he said.

“When we’re talking about pound notes and money involved, that’s when people seem to act properly, and seem to act in the right way.

“The government haven’t done that when it comes to discrimination on social media platforms, the energy isn’t the same and that is one of the reasons why the social media companies aren’t really taking heed of what is being said by the footballing bodies.”

“We need to protect young kids, young adults as well. And growing up with all this social media going on, it needs to be things put in place for these trolls and keyboard warriors to take responsibility for their actions.”

Why are they doing this?Two years ago, a number of footballers took part in the #Enough campaign – a 24-hour social media boycott in protest at online abuse.

But players across all sports continue to be subjected to racist abuse, with some clubs contacting police over the level of aggression.

An investigation by the Professional Footballers’ Association, the players’ union, found 56 abusive posts on Twitter in November 2020.

The PFA reported them to the platform but 31 of them are still visible, which the organisation described as “absolutely unacceptable”.

On Friday, Manchester United revealed their own analysis had found a 350% increase in abuse directed towards the club’s players, with 3,300 posts targeting players during the period September 2019 to February 2021.

It found 86% of those posts were racist, while 8% were homophobic or transphobic.

Three weeks ago, Swansea City were joined by Birmingham City and Rangers in turning off their social media accounts for a week to make a stand against abuse.

‘It’s not OK to get abused online’ – Henry talks to BBC Newsnight about his decision to leave social mediaFormer Arsenal and France striker Thierry Henry removed himself from social media in March because of racism and bullying across platforms.

A BBC Sport survey in August of elite British sportswomen found that one third of participants had suffered abuse on social media.

The UK government has previously threatened social media companies with “large fines”, which could amount to “billions of pounds” if they fail to tackle abuse on their platforms.

Individuals and football clubs have condemned the abuse, and it has been decided that collective action is the best way to bring about change.

What do the social media companies say?Facebook, which owns Instagram, has said it is committed to tackling abuse on its platforms.

Instagram last week announced a tool to enable users to automatically filter out abusive messages from those they do not follow on the platform.

Twitter released a lengthy statement in Februaryexternal-link, stating it was “resolute in our commitment to ensure the football conversation on our service is safe for fans, players and everyone involved in the game”.

The company added it had removed more than 7,000 football-related tweets in the UK that violated its rules.