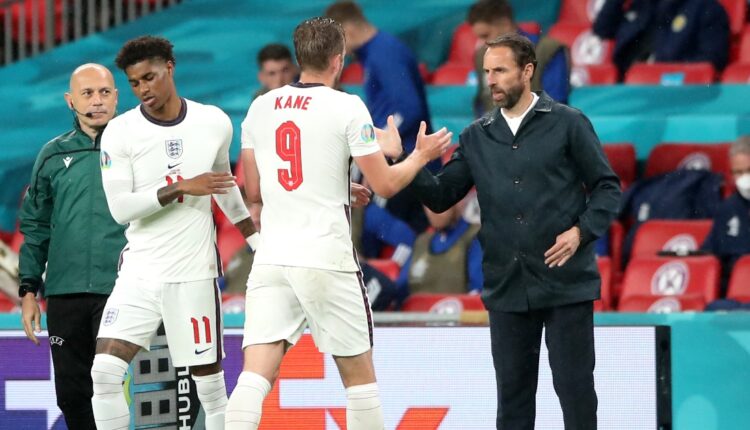 Gareth Southgate says he is ‘frustrated’ by the goalless draw between England and Scotland at Wembley.

The Three Lions were looking to secure their place in the knockout phase of Euro 2020 by picking up three points.

But they were outplayed by a Scotland side who also nullified the threat of Harry Kane, Phil Foden and Raheem Sterling.

John Stones had the best chance for England, heading a first-half corner onto the post.

Mason Mount was played in by Raheem Sterling moments later but couldn’t guide his shot on target.

Stephen O’Donnell showed the Scots’ threat by forcing a good save from Jordan Pickford with a volley.

The second half had less clear-cut chances, helping Scotland to gain a well-earned draw against their rivals.

It leaves England needing a point from their final group game against the Czech Republic to qualify for the last 16.

The result also boosted Scotland’s hopes of reaching the next round. They need a win against Croatia on Tuesday to have any chance of going through.

Reacting to the draw, Southgate told reporters: “I think it was a frustrating night and we know we can play better. Got to give Scotland credit, they defended valiantly and played well.

“We didn’t do enough to win the game but after that the thing we have to worry about in tournament football is we had to make sure we didn’t lose it. We know it’s a disappointment for our supporters, but we have to dust ourselves down and move on.”

Talisman Harry Kane was brought off for Marcus Rashford in the second half after failing to register a single shot on target.

Despite his poor performance, the decision received criticism from pundits due to Kane’s goalscoring talents.

Justifying the change, Southgate added: “We needed more runs in behind, I felt Marcus Rashford would give us that energy. We have to make these decisions based on what we see.

“The whole team can look at ourselves, that starts with me, we’ve got to be better. We didn’t do enough to win the game tonight, not enough attempts on goal, we have to go away and look at that.”

When asked about potential changes for the Czech Republic game, Southgate said: “[We’ve got to] see how everyone is, prepare for a different type of opponent and make the right decisions.”