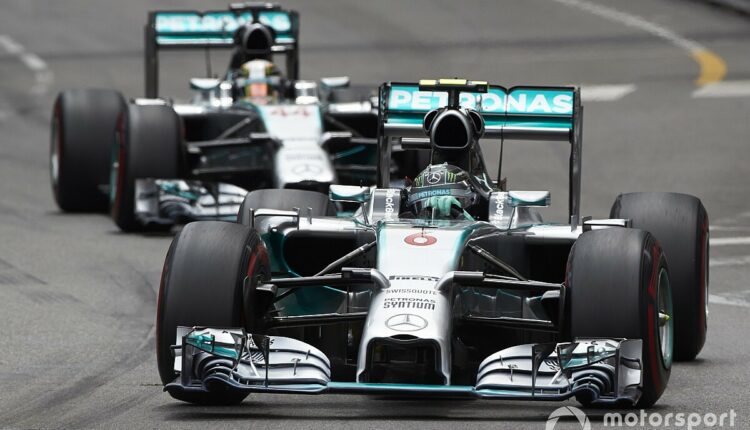 The day Rosberg and Hamilton’s F1 relationship blew up

The explosive nature of their rivalry caused great tensions within Mercedes as they fought for wins and titles in what was effectively an intra-team contest on the majority of weekends for three seasons.

It occasionally spilled over on-track, notably with three on-track collisions – Belgium 2014, Spain 2016 and Austria 2016 – but there were constant battles bubbling under the surface, making it a challenge for the team to manage.

Once Mercedes had the dominant car under the V6 hybrid regulations in 2014, the games between Hamilton and Rosberg quickly began. In their epic Bahrain battle, both used engine modes against the team’s wishes to try and gain extra performance. Hamilton then pulled the same trick in Spain to hold off Rosberg for victory, adding kindling to the fire that was beginning to burn between the pair.

But things truly blew up two weeks later in Monaco when an incident in qualifying acted as the first public showing of how sour the relationship between Hamilton and Rosberg had become.

Following his 2013 victory, Rosberg was aiming to join the likes of Ayrton Senna, Alain Prost, Graham Hill, Michael Schumacher and Niki Lauda by recording back-to-back wins in Monaco. He also had to break Hamilton’s momentum after four straight wins had put the Briton into the lead of the drivers’ championship by three points.

The pair were evenly-matched through practice and the first two stages of qualifying. Rosberg beat Hamilton by one-tenth of a second in Q1 before the result was reversed in Q2.

Rosberg was able to take provisional pole with his first run in Q3, putting in a lap of 1m15.989s to pip Hamilton by just five-hundredths of a second. But with a fresh set of super-soft tyres and the track improving lap by lap, the final runs would surely provide enough time gains to swing the momentum back to Hamilton.

And so it proved as they started their final laps. Rosberg lost one-tenth of a second through the opening sector, while Hamilton had gained two-tenths, putting him on-course to snatch pole away. 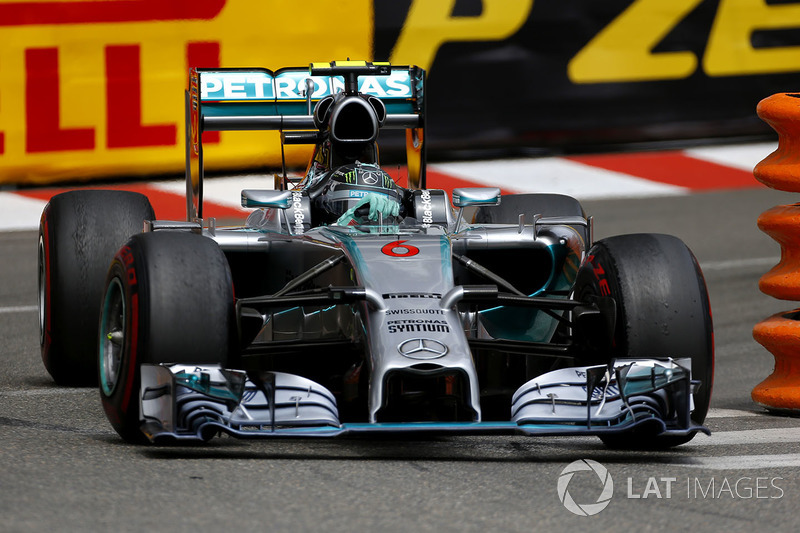 Rosberg exited Casino Square before thundering down the hill to Mirabeau, duking his car to the right to avoid the bump in the road before pulling back towards the wall on the left.

As he lined up to brake for the corner, Rosberg began to saw at his steering wheel. First right, then correcting left, then right and left again. He increased the lock to the right a third time as he tried to make the corner, only to find his front-right wheel was locking up. A final attempt was made to make the corner, again sawing left then right, before finally he abandoned the lap, swinging the car left and into the slip road.

In all, there were nine attempts to change the direction of the car, all futile in keeping Rosberg on his pole lap. But they succeeded in bringing out yellow flags, forcing all of the cars to slow – including Hamilton.

Rosberg backed his car out of the slip road before returning to parc ferme to celebrate pole position.

“I tried to make it, but turned out as I was going to hit the tyre wall,” Rosberg said. “It was close but I managed to go into the escape road. I know that I had a really good banker in there, so I tried to push that little bit more and went over the edge.

“I thought it was over. Of course I’m sorry for what happened for Lewis. I didn’t know exactly where he was until I was reversing and saw him coming up. Of course that’s not great, but that’s the way it is.”

Hamilton refused to answer questions about whether Rosberg’s move had been deliberate, only saying: “I should have known that was going to happen.”

He added: “I don’t know if Senna and Prost talked about it, but I quite liked the way Senna dealt with that so I’ll take a page out of his book.” 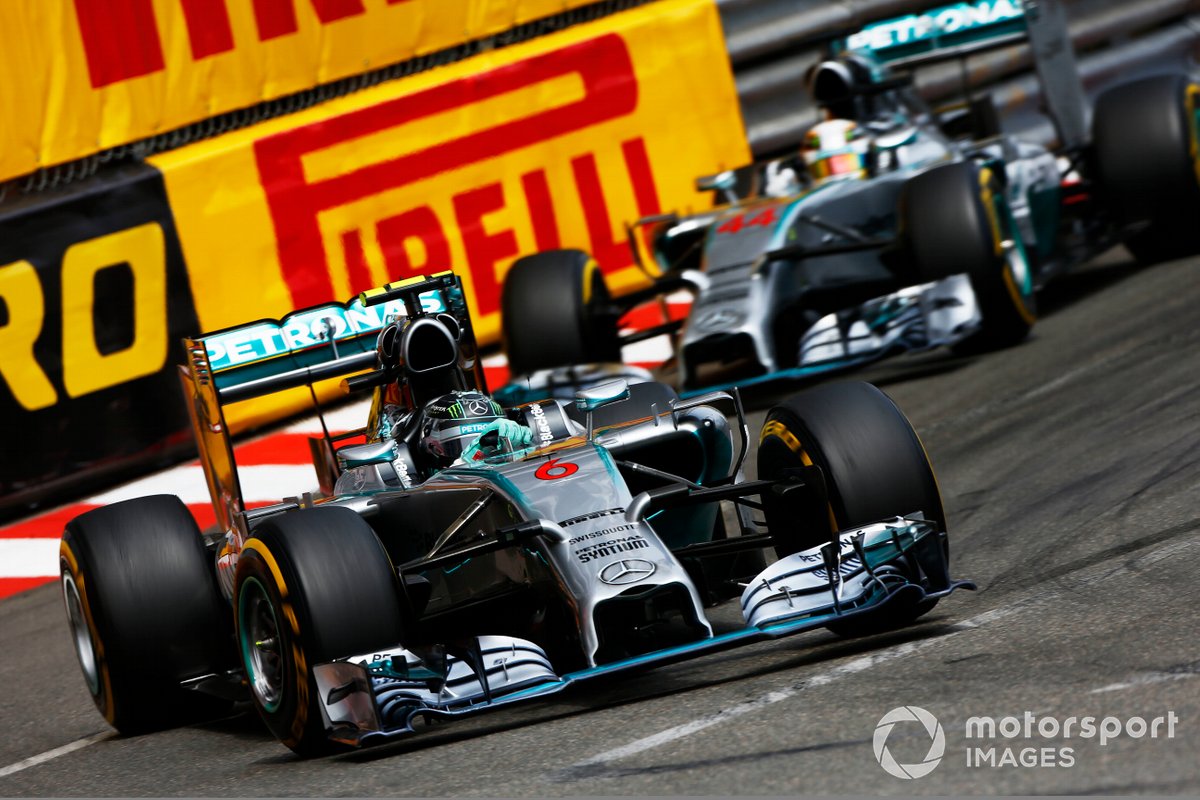 Williams driver Felipe Massa said Rosberg’s steering had been “strange”, while the stewards agreed it was worth investigating, taking three hours to look over the footage.

“When [Rosberg] starts moving the steering wheel, that starts to unsettle the car, something you wouldn’t do normally,” ex-F1 driver Johnny Herbert said on Sky Sports after the incident. “Then he starts to go on and sort of locks. It looks very half-hearted.

“It’s always moving. Maybe it locked under braking, I don’t know, but it looked very strange. It’s very easy then to go straight on.”

Three hours after confirming their investigation, the stewards cleared Rosberg of any wrong-doing, saying they “could find no evidence of any offence related to the Turn 5 incident” after looking at the video footage and telemetry.

Mercedes team principal Toto Wolff leapt to the defence of Rosberg, but was understanding of Hamilton’s suspicions.

“It is all discussed and it was a very tough narrow fight between the two of them. We analysed the data, and there is nothing else to be said.”

Come raceday, Rosberg would ease to his second Monaco win in a row, with any hopes Hamilton had of undercutting his teammate being dashed when they were pitted on the same lap under the safety car. Dirt in Hamilton’s left eye left him struggling through the closing stages of the race, but he managed to fend off Daniel Ricciardo to keep second place.

But the talking point remained how relations between Hamilton and Rosberg had hit a new low. In the post-race ceremonies, there was no handshake or congratulations between the pair. They were no longer on speaking terms.

Asked if the issues with Rosberg could be resolved, Hamilton said: “I don’t have an answer for you.” Rosberg was more chipper about trying to fix things, saying the pair “always sit down and discuss it and move on, and that is what we will do.”

“What I did not like, and I have to say, and I will tell [Hamilton] this on Monday, is that when you are up there [on the podium] and you don’t say hello to your teammate, which Nico has always done – that is not good,” Lauda said after the race.

“It’s not because I am well educated, but it’s for the brand Mercedes. This is something I start to worry about now, but it’s easy to fix.”

Five days later, Hamilton appeared to make peace with Rosberg, posting a picture on social media of them riding unicycles together from when they were teammates in go-karting.

“We’ve been friends a long time, and as friends we have our ups and downs,” Hamilton wrote. “Today we spoke and we’re cool, still friends.”

But neither Lauda nor Hamilton would be proved right. It would not be easy to fix. Hamilton and Rosberg would not remain friends. Instead, their fight led to some of the most explosive moments in recent F1 history, the rivalry only defused once Rosberg called it quits after winning the title in 2016.

Whether it was a genuine error or a clever ploy by Rosberg, his Mirabeau mishap left a crack in their relationship that would never be repaired. Only he will know for definite what the truth was. 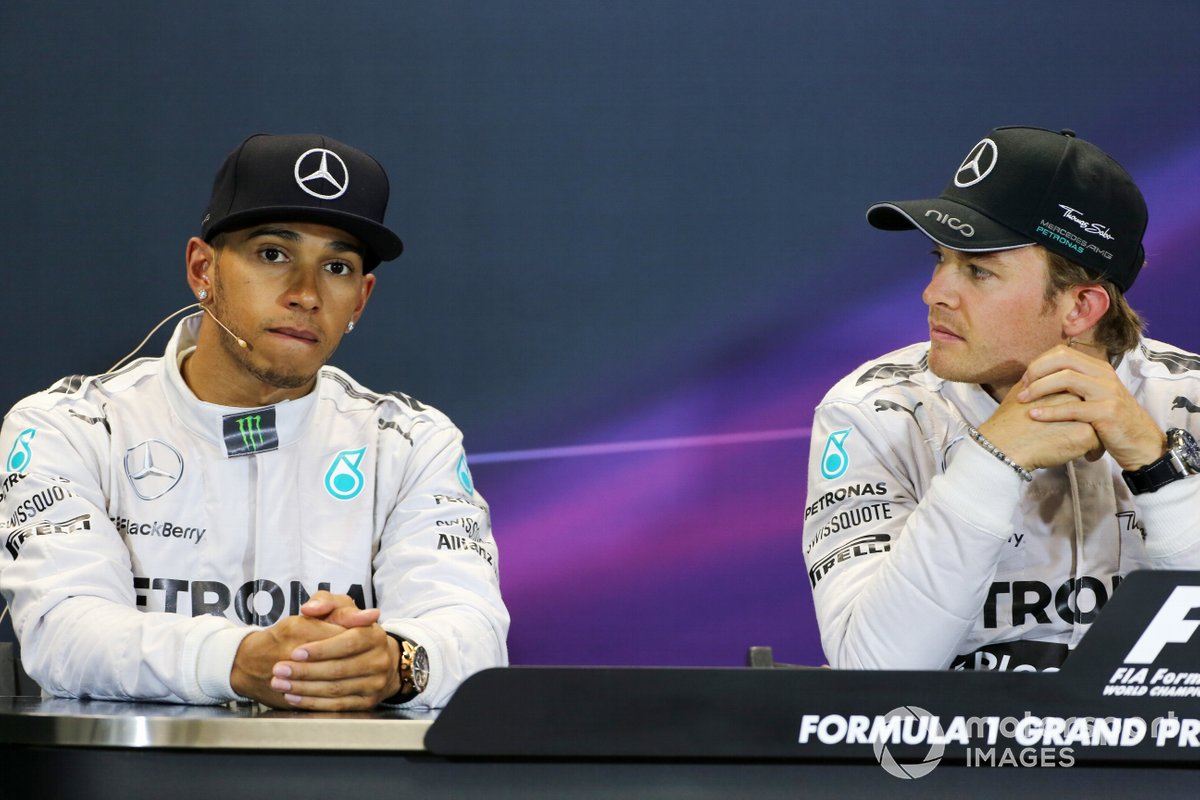