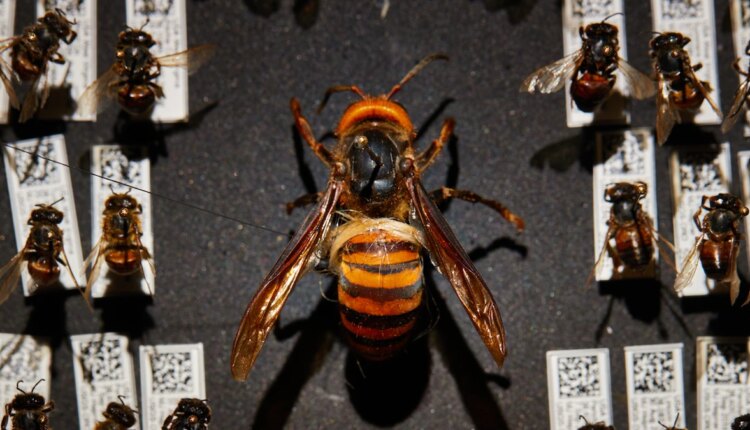 The Untold, Dramatic Story Behind The Discovery Of America’s First Murder Hornet Nest

The Asian giant hornet I’m holding in my hand is vivid orange and black, nearly as long as my pinky, with a stout armored body ending in a needle-like stinger. Its head is huge, even by wasp standards, with jagged, strong mandibles. Long antennae extend from its face, framed by dark, oval eyes.

On a table in front of me is the first “murder hornet” nest found in the United States, including dozens of its dead inhabitants, all removed from a tree in Blaine, Washington, in late October 2020. Separated into six combs with nearly 800 cells, it was found inside the hollow of an alder tree, holding around 400 adults and larvae. Nearly a hundred were adult queens, and about the same number of larvae could have developed into one—each with the theoretical potential to start her own nest.

U.S. Department of Agriculture research entomologist Matthew Buffington invited me to see the nest, housed at a government lab outside Washington D.C., prior to it going on view at the Smithsonian’s National Museum of Natural History this summer.

With salt-and-pepper hair and a jocular manner, Buffington sports a honey-colored belt bearing pictures of parasitic wasps that eat invasive stinkbugs. He explains how important it is to have this milestone of natural history to study and show to the public.

“It’s a core part of the story of this species arriving in North America,” Buffington says. “It fills in the whole picture of the organism.”

These hornets, scientifically known as Vespa mandarinia—the world’s largest wasps—are native to much of East Asia. But in fall 2019, a small number were discovered near Vancouver, British Columbia, and two dead hornets were found in the far northwestern corner of Washington State. In May, the media dubbed the insects “murder hornets,” leading to a firestorm of attention. (Learn more: ‘Murder hornet’ mania highlights dangers of fearing insects.)

After months of intense effort to head off the hornet’s invasion, researchers found and removed the hive in Blaine, Washington. To learn more about the invasive species, they set about studying the nest, with eventual plans to exhibit it to the public. But those plans were interrupted.

At one point, it was repossessed by the man upon whose land it was found—who had begun trying to sell the dead hornets. Here’s the untold story of America’s first murder hornet nest—its discovery, loss, and reclamation—and what it has taught us.

Alarmed by the discovery of giant hornets in fall 2019, scientists with the Washington State Department of Agriculture and a large group of volunteers began gearing up to find—and kill—the insects before they could spread. Presumably, they reasoned, one or more nests had been established, potentially seeding the area with new queens capable of overwintering and forming a nest come summertime.

One such volunteer was Ruthie Danielsen, a beekeeper who was horrified to learn about the hornets’ arrival. “This was over the top,” she says. She organized dozens of beekeepers and local citizens to put out hundreds of traps in spring 2020. Months later, success. “I caught the first worker [hornet] in one of my traps, just a half mile from my house—that was kind of bizarre and cosmic.”

But this worker was dead, so it couldn’t be tracked. Another private citizen named Phillip Bovenkamp spied a huge hornet hovering about the eaves of this house in Blaine. Chris Looney, an entomologist with the Washington State Department of Agriculture, dropped by to talk with him, and as he was about to leave, he too saw a hornet—and netted it.

“This has been like chasing ghosts the whole time. And finally I got a ghost in the net,” Looney recalls.

To capture many of these moments, director Michael Paul Stephenson and colleagues were on hand with cameras. As detailed in a discovery+ documentary, “Attack of the Murder Hornets,” the researchers attempted to track this hornet but failed in part because it appeared too worn out to fly home. They found another hornet, and tried again using an experimental tracking system. No luck. But they were learning quickly—and by that time, looking in the right place.

They set up more live traps, catching a total of four insects, and acquired new tracking tags provided by the Animal and Plant Health Inspection Service, a branch of the USDA. On October 22, they affixed one of these tags to a female worker with floss and fed her strawberry jelly. Satiated, she took off.

Looney, state entomologist Sven-Erik Spichiger, and others followed in the general direction that the hornet flew, using radio-transmitters that issued audible pings when aimed at the tag. The noises directed them into thick woods and blackberry brambles.

Soon, they found the hive—not in the ground, as expected, but about eight feet up in an alder tree. “We got ourselves a nest,” Looney says, as detailed in the documentary, doing a celebratory dance.

“We got ourselves a problem,” Spichiger replies: How to get the nest out the tree without being stung?

Asian giant hornet stings elicit extreme pain—like being “stabbed by a red-hot needle,” says Shunichi Makino, a researcher at Japan’s Forestry and Forest Products Research Institute. In their native range, they kill dozens of people each year, he says. “Usually, the stung part severely swells and continues aching for a few days,” Makino says. (Learn more: Why are ‘murder hornet’ stings so intense?)

Two days later, the scientists approached the hive before dawn in puffy, astronaut-like suits impenetrable to stingers. They collected scores of hornets using a modified vacuum and subdued those that didn’t leave with carbon dioxide. Finally they cut down the section of tree surrounding the hive and took it to a room-size refrigerator at Washington State University, where yet more hornets emerged.

The discovery of the hornet nest was a key step in preventing the species from spreading throughout the state, and the researchers set about studying the hive, weighing hornets and larvae, and conducting other analyses.

But Looney and colleagues soon learned of a snag. Jaime Polinder, the man who owned the land where the nest was found, wanted it and almost all the hornets back. Legally, the state had to oblige. It came as a blow to the scientists, Looney says, although Polinder did let researchers keep it for a couple months to do their work.

In March 2021, a listing on eBay appeared advertising “murder hornet” queens for sale from the “first ever nest found in Washington State.” When I saw it, I thought it was a scam, but it wasn’t: Polinder was seeking to make some money from the nest that appeared on his land, though it’s unclear how many he succeeded in selling, if any.

Polinder did not respond to National Geographic’s multiple requests for comment.

When Danielsen found out, she was furious, because she felt the nest should be available to scientists to study—and belong to the public. She got in touch with Polinder to buy the whole hive. He agreed, and the very next day, she arrived and picked it up.

Then she returned it to Looney and colleagues, who set about doing more research. A collaborator scanned the hive in 3D to digitally preserve its structure. The team also began examining the frass excreted by larvae for clues as to what the hornets eat. Looking at the DNA within this material, the scientists have determined the hornets in this nest ingested honeybees, at least five species of yellowjackets, 10 species of flies and beetles, three species of moths, and two types of dragonflies. Oh, and some beef, origin unknown.

Meanwhile, a handful of collaborators around the country are doing their own research on individuals from the nest. One of the primary questions is where the hornets originated from, with all sorts of implications for hoping to understand and prevent the species’ spread. Preliminary work suggests the Washington State invasion can be traced to South Korea, while British Columbia’s hornets hail from Japan. But more work is needed to confirm these findings.

International research and collaboration is gearing up, and some researchers suspect that there are actually multiple species of Asian giant hornet. Others are also working to develop special lures that will more reliably attract and trap these insects.

Back at the lab with Buffington, National Geographic photographers Becky Hale and Mark Thiessen photograph the hornets in various scenes, such as positioning them next to European honeybees to show their massive size—like a great white shark hovering over a school of minnows.

Buffington recalls getting a specimen mailed to him for the first time, in late 2019, and marveling at the size. In his role as the USDA’s final authority of hornet species identification, he quickly surmised it was Vespa mandarinia—the first record in the country.

“That’s a red flag right off the bat,” he remembers thinking. “When you find something new, it’s usually significant.” But the implications of the finding had only just begun to sink in.

The nest itself is so important because it’s a testament to both the culmination—and beginning—of so much effort to stop the species from invading, he says. “At heart I’m a collections guy, so to me the nest represents something very significant…. and people get a real kick out of seeing it.”

Luckily the researchers caught this nest at a great time, before scores of queens escaped, Buffington says—but it seems quite likely that at least a few did make it out on their own. In 2021, researchers found three more nests, all which seem genetically related to this first one.

Everything the scientists learned in finding this first nest has already paid off, and leaves Buffington feeling “cautiously optimistic where we’ve observed this thing early enough to stop it.”

How has the Economy of Cuba been Affected by Bitcoin?

The bizarre drama behind a pinch of moon dust that just sold for $500,000

Can this 19th-century health practice help with long COVID?