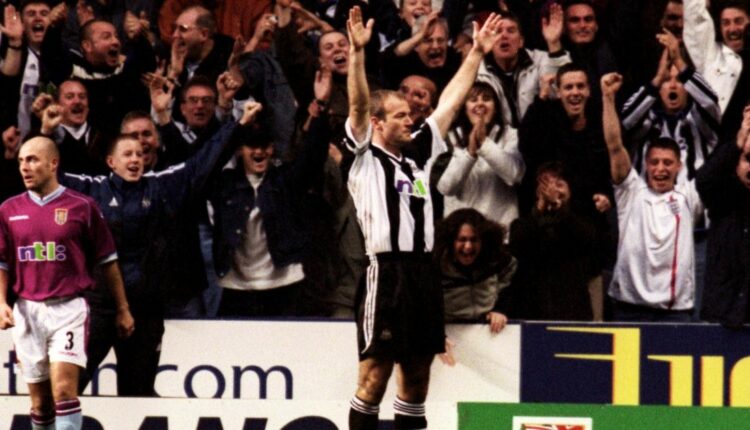 The Villa volley: A tribute to Shearer’s unlikeliest Newcastle goal

In any given league at any given time, you’ll have a sprinkling of great goalscorers mixed with a handful of scorers of great goals. Yet rarely are those people one and the same.

In the Premier League, we have been lucky. Why? Because the greatest ever goalscorer just so happened to be the scorer of some absolute scorchers.

Alan Shearer was a man who could tonk the ball so hard and from so many angles that it often made the mind boggle and – after his 1996 homecoming – the Gallowgate faithful go mad.

For Newcastle alone, there were more than thundercrackers and onion-bag bulgers you could count on your fingers and toes.

The delightful finish after a sombrero skill in a 7-1 demolition of Spurs; the bullish turn and whipped shot against Chelsea; magnificent free-kicks versus Wimbledon, Arsenal and Manchester United; then the one he calls “the best” in his career, that Ameobi knock down and net-breaking volley against Everton.

You could discuss which was your favourite, the one you think is the best, until the Brown Ale runs dry.

Here, though, we are not looking to give our thruppence ha’penny on which was the finest. Instead, we have gathered you around to pay tribute to another sumptuous Shearer strike that was perhaps his most improbable.

It was November 3 2001 and travelling up to St. James’ Park were the league leaders. No, not Arsenal. No, not Manchester United either. Eleven weeks into the 2001-02 season, it was John Gregory’s Aston Villa who sat top of the pile.

Newcastle themselves were sixth, but that they were only four points off Villa at the start of the day tells you how tight it was at the top.

Bobby Robson’s side has finished the previous campaign a disappointing 11th, but after signing the talented trio of Craig Bellamy, Jermaine Jenas and Laurent Robert, they were hoping for much more in the new season.

Shearer too had returned following a lengthy spell on the sidelines in the spring and summer of 2001 with a recurrence of his old knee troubles. He’d struggled to get up and running though – just two goals in the opening 10 weeks of the season a paltry return by his standards.

From the off, the Magpies showed they were out to steal away with a shiny statement result. Robert and Bellamy both had good chances early on. Both, though, were denied by the towering presence of a 37-year-old Peter Schmeichel in goal.

After 20 minutes, however, not even Schmeichel’s presence was enough to repel the Newcastle attack. Bellamy got another chance. This time, Newcastle’s little attacking terror made no mistake.

By this point, with chances flowing, Shearer must have been desperate to get on the scoresheet too, especially after the start of season that he’d endured. Early in the second period he saw a header bounce infuriatingly off the bar. But it was not long until his moment came.

Fifty minutes in, Bellamy burst up the wing in his tearaway style. He cut the ball back to Robert who looked inside and found Rob Lee in the middle. Shearer knew what his old mate would have in mind and set off. Lee floated the ball over the top.

Up until this point, it had the makings of a nice goal. What came next though, made it one of the most fantastic and fantastical in Premier League history.

As the ball dropped over his left shoulder, Shearer had only Schmeichel to beat. But he was two yards wide of the six-yard box on the right-hand side and only six yards from the byline.

The logical, percentage move would have been to take a touch and square it. But Shearer wasn’t one to think of percentages or shooting positions. He knew how he could get it in. He was the only person in the stadium who did.

As the ball fell, he lifted up his right leg and stuck out a side foot, almost perfectly flat. In most instances, you would expect a side-footed ball from a right footer to curl inwards and lose velocity.

Here, though, it cannoned off his foot and curled in the opposite direction, swerving from outside to inside of the far post and nestling in the top corner – a near-impossible trajectory only the second angle does justice to.

It was a finish few would even have contemplated, let alone tried. And it was the only way he could have hit it that would have worked. The outside of the boot and it wouldn’t have got the direction, the laces and it would have flown into the Gallowgate.

The Guardian’s match report described the strike as “one of the best finishes of his distinguished career.”

Shearer concurred in a post-match interview: “It has to be up there as one of the best [I’ve scored], if not the best.”

As we said, though, we’re not here to make a judgement on the absolute all-timer, merely to praise a brilliantly unlikely bit of improvisation.

“Rob Lee always tells me that it was his pass that made it,” Shearer laughed years later. “I’ve always said to Rob, ‘It wasn’t a great pass, it was a good pass and I had to do the rest.’

“I’ve looked up and I’m aware there’s no-one in the middle, so I’ve just thought, well, ‘Sod it’, basically. Just take it, pot luck and have a shot.”

Pot luck? It looked more like a work of genius to us.

And for Shearer, at the time, the goal was triply sweet. As commentator Rob Palmer said: “Oh, he’s found his touch again. There’s nothing worse for a defence than Alan Shearer with a point to prove.” He’d made one to the rest of the league.

Not only that, but he’d done so against an old nemesis.

“When you have a look at Peter Schmeichel’s face,” Shearer told the Premier League site in 2018, “when he realises he’s beaten and he turns around and his hands [are] on his hips. It meant so much because it was against Peter Schmeichel, who I am good friends with… now.”

The pause before the last word tells you how he felt then.

The one long-standing gripe that Shearer has about the goal is that, according to him, “A lot of people said it was actually a cross.”

Whoever those people are, we suggest their remedy their scepticism by going and watching a few YouTube compilations of Shearer in full flow.

More Newcastle United
17 of the best quotes on Sir Bobby Robson: ‘He is immortal’

Can you name Newcastle United’s XI from Alan Shearer’s debut in 1996?