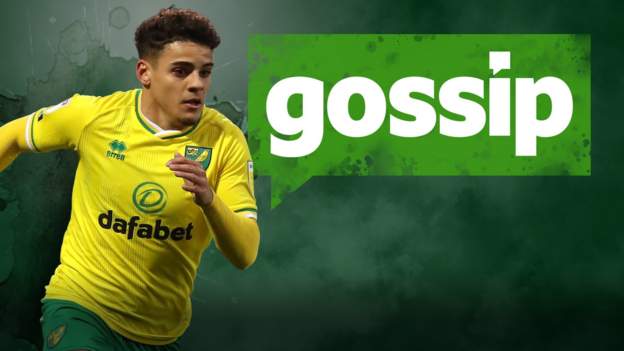 West Ham have joined Barcelona, Bayern Munich and Tottenham in the race to sign Norwich City and England Under-21 full-back Max Aarons, with the Premier League-bound club demanding at least £30m for the 21-year-old. (Independent)external-link

Manchester United’s prospects of signing England forward Jadon Sancho, 21, from Borussia Dortmund may have been improved by the news executive vice-chairman Ed Woodward is to leave the club. (Star)external-link

Burnley are interested in signing Algeria midfielder Nabil Bentaleb from Schalke in the summer, with the 26-year-old likely to be a free agent as he is not expected to sign a new deal with the German club. (Sun)external-link

Uruguay striker Edinson Cavani, 34, has met with Manchester United officials and reiterated his desire to leave the club and return to South America to be close to family. He has been strongly linked to a move to Boca Juniors in recent months. (Depo – in Spanish)external-link

Liverpool look as if they could miss out on long-term target Ugurcan Cakir, 25, after Borussia Dortmund moved in with a big offer for the Trabzonspor and Turkey goalkeeper. Aston Villa and Atletico Madrid are also interested in the 25-year-old. (Fotospor, via Team Talk)external-link

Manager Dean Smith says Aston Villa do not have plans to sign Chelsea and England midfielder Ross Barkley, 27, on a permanent basis when his loan deal expires at the end of the season. (Mirror)external-link

German great Jurgen Klinsmann has said “anything is possible” after the former Tottenham striker was linked with a return to Spurs as manager. (ESPN)external-link

Arsenal owner Stan Kroenke does not intend to sell the club and will cover the costs of the aftermath of the European Super League controversy. (Evening Standard)external-link

Roma are set to meet Jannik Vestergaard’s representatives as they work on plans to sign the Southampton and Denmark defender, 28, who is also wanted by Tottenham and Juventus. (Tuttomercatoweb – in Italian)external-link

Juventus would be willing to offer 26-year-old France midfielder Adrien Rabiot to Manchester United as part of a deal for Brazilian defender Alex Telles, 28. (Calciomercato – in Italian)external-link

Scottish defender Lee Wallace, 33, is set to sign a new one-year deal with Queens Park Rangers, but there is some doubt about whether the Championship club will take up the option to sign on-loan midfielder Sam Field, 22, on a permanent basis from West Bromwich Albion. (West London Sport)external-link

Tottenham winger Erik Lamela, 29, is ready to leave the London club for a return to Italy. Napoli and AC Milan have been linked with a move for the Argentine. (Area Napoli, via Team Talk)external-link

Sassuolo have set a price tag of at least £13m for 21-year-old Italian striker Giacomo Raspadori, who has been linked with both Inter Milan and Juventus. (Calciomercato – in Italian)external-link

The Times carries more on the European Super League story

A football club brought back from the brink: The rocky story of Derry City is streaming nowThe Murder That Changed a Nation: Stephen Lawrence’s story and the lessons still being learnt

The US millionaires investing in lower-league clubs