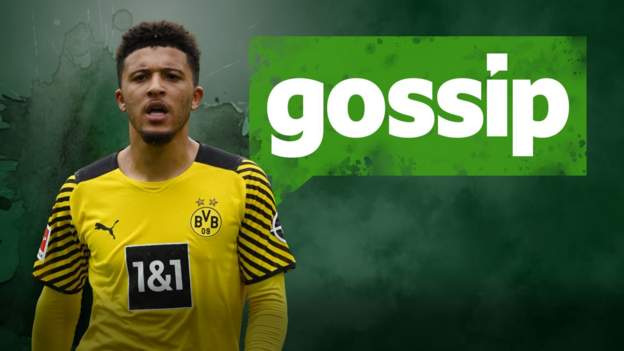 Borussia Dortmund have told England winger Jadon Sancho, 21, he can leave the club this summer. (Bild – in German)external-link

Manchester United manager Ole Gunnar Solskjaer has made signing Sancho a priority this summer, despite some of his players lobbying for the club to sign Aston Villa and England midfielder Jack Grealish, 25. (Telegraph)external-link

Some figures at Tottenham think they should try to reappoint Mauricio Pochettino as their next manager. Pochettino, the Paris St-Germain boss, could be open to a return. (Independent)external-link

Hazard wants a move back to Chelsea, who he left for Real in 2019. (El Chiringuito – in Spanish)external-link

Luis Suarez says he’ll stay at La Liga champions Atletico Madrid, despite the 34-year-old Uruguay striker having been linked with a return to Liverpool. (Liverpool Echo)external-link

Oscar-winning producers are committing to a box office film about Leicester’s English striker Jamie Vardy, 34, despite the Foxes missing out on the top four and the Champions League on the last day for the second successive season. (Mirror)external-link

West Ham fear Manchester United will block them from signing England midfielder Jesse Lingard on a permanent deal. The 28-year-old impressed on loan at the Hammers this season. (Sun)external-link

Barcelona and Bayern Munich are both trying to sign Liverpool and the Netherlands midfielder Georginio Wijnaldum, 30, on a free transfer. (Sky Sports)external-link

Leeds United have held talks over a move for 21-year-old Dutch winger Noa Lang, who has helped Club Bruges to the Belgian title this season during a loan spell from Ajax. (Mail)external-link

Wolves are in talks with Bruno Lage to become their new manager. Lage has been a free agent since leaving Benfica last year. (Telegraph)external-link

Newcastle boss Steve Bruce has made it clear that he will ask for money to spend in this summer’s transfer window, with a move for Arsenal’s 21-year-old English midfielder Joe Willock his main priority. (Chronicle)external-link

Newcastle are to revive their interest in Celtic’s French midfielder Olivier Ntcham. The 25-year-old has been on loan at Marseille. (Football Insider)external-link

Australia goalkeeper Mat Ryan, 29, has suggested he could prolong his spell at Arsenal after his loan stint from Brighton came to an end. (Mail)external-link

AC Milan are close to signing 25-year-old French keeper Mike Maignan from Lille in a move that could lead to the departure of 22-year-old Italy keeper Gianluigi Donnarumma, whose contract with the Serie A side expires this summer. (Sky Italia, via Mail)external-link

Turkey international Hakan Calhanoglu’s contract at AC Milan runs out this summer but the 27-year-old midfielder says he has not decided his future and wants to concentrate on Euro 2020. (Fotomac, via Football Italia)external-link

The Sun’s back page