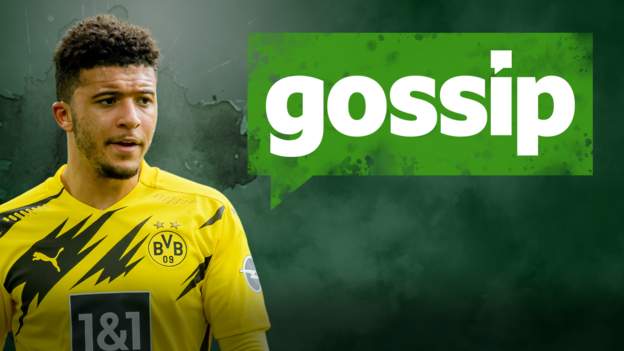 Argentina forward Lionel Messi’s father Jorge has met with Barcelona president Joan Laporta to discuss his son’s future at the club. The 33-year-old forward’s contract with the Nou Camp club runs out this summer. (TV3, via Marca)external-link

Chelsea will listen to offers of about £40m for England striker Tammy Abraham, 23, this summer. (Telegraph – subscription required)external-link

The Blues are preparing a £90m bid to bring Inter Milan and Belgium forward Romelu Lukaku, 27, back to the club. (Sun)external-link

Leicester City manager Brendan Rodgers, who has been linked with becoming Tottenham boss, says he is “happy” with the Foxes and wants to continue his work at the club. (Star)external-link

Everton are interested in Juventus and Turkey defender Merih Demiral, 23. (Calciomercato – in Italian)external-link

Arsenal are prepared to sell Spain full-back Hector Bellerin, 26, and want Norwich and England Under-21 defender Max Aarons, 21, to replace him. (90 min)external-link

France striker Olivier Giroud, 34, is unlikely to renew his contract at Chelsea. (Goal)external-link

Arsenal are considering a move for Borussia Dortmund and Germany midfielder Julian Brandt, 24. He could replace Martin Odegaard if the Norway playmaker is recalled to Real Madrid at the end of the season. (Bild, via Mail)external-link

Sevilla’s 22-year-old former France Under-21 defender Jules Kounde, who has previously been linked with Chelsea, is attracting interest from Real Madrid. (AS – in Spanish)external-link

Burnley are ready to bid £9m to sign Republic of Ireland Under-21 centre-back Nathan Collins, 19, from Stoke City. (Football Insider)external-link

Norwich manager Daniel Farke is on the shortlist of German clubs Eintracht Frankfurt and Wolfsburg, who could both lose their manager in the coming weeks. (Express)external-link

Spain midfielder Dani Ceballos, 24, says it “would be difficult” for him to extend his loan at Arsenal from Real Madrid and he likes La Liga more than the Premier League. (Goal)external-link

Watford are in talks with Chelsea about signing 22-year-old English striker Ike Ugbo, who is on loan at Cercle Bruges, in a £5m deal. (The Athletic)external-link

France midfielder Tiemoue Bakayoko’s agent says he is unsure if the 26-year-old will stay at Napoli beyond the end of his loan stint at the Italian club from Chelsea.(CalcioNapoli24, via Football Italia)external-link

Manchester United and Portugal midfielder Bruno Fernandes, 26, says he would “love” to manage the Premier League club when his playing days are over. (ESPN)external-link

Are you a pub quiz whizz? Then test your knowledge of the OscarsNo Passion, No Point is back: Eddie Hearn chats to the Rio Ferdinand about his next career move