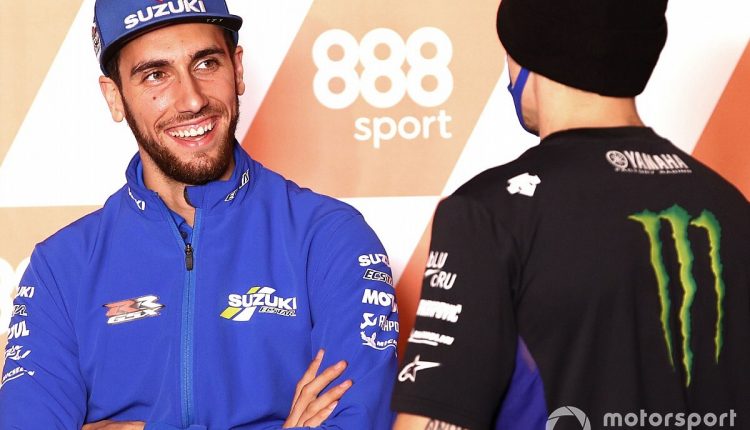 Yamaha was forced to exceed Vinales’ allocation of five engines for the season this weekend in Valencia owing to concerns over the durability of his well-worn remaining motors.

As a result, Vinales will have to start Sunday’s race from pitlane, but won’t for the Valencia and Portuguese GPs so long as he doesn’t unseal another engine.

This follows on from Thursday’s ruling from the FIM which found Yamaha had used illegal engines at the Spanish GP and docked the manufacturer 50 constructors’ points – though the riders were not stripped of any.

Rins – who was sixth fastest on Friday at Valencia – was critical of the FIM’s decision to spare the riders, stating: “In the end there are so many bad decisions made by the stewards that you have to accept them.

“For many penalties that are put out and for many complaints from the riders nothing changes.

“I like to win on the track, not off it, it will motivate me to have more strength to compete. If we win, we will win with more merit.”

The Suzuki rider added there are “more injustices” not being talked about, like Vinales being able to run a fresh engine and taking just one penalty while the rest have to continue using their worn units simply because their manufacturer has had less issues.

“Leaving aside this issue [the penalty for Yamaha], there are also more injustices which are not seen or which you do not ask about,” Rins, who is an outside title bet at 32 points off the lead, added.

“For example, Maverick, who uses a new engine and has to start from the pitlane only in this race will then benefit in other [races because he] has an engine with fewer kilometres [on it], and that is not talked about.

“I already said, there are so many injustices and they are not talked about. You have to abide by them and fight.

“If he opens a new engine in Valencia 1 and continues with this engine in the following [races], clearly he has an advantage.

“So, what would make sense is for him to start out of the pitlane every time he uses this new engine. But the rules are [not] made like this.”

Chase Briscoe enters Xfinity title race with “nothing to lose”