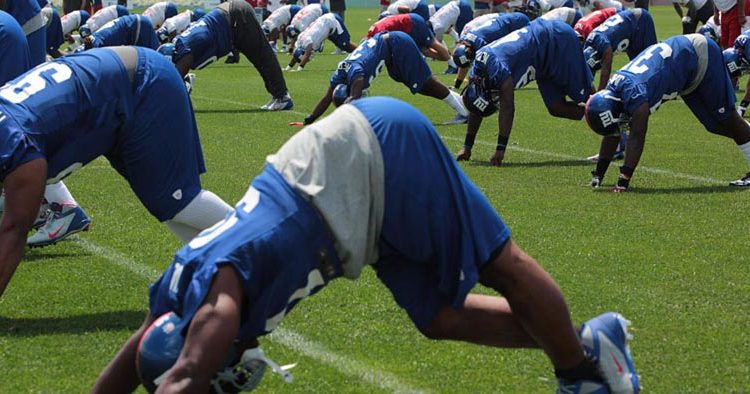 It is easy to imagine the best NFL players lifting weights and doing a lot of running as part of their exercise routines. Yet, this only tells us part of the story about how these athletes keep in shape.

There is also a current trend for football players to use yoga as part of their regular workout programs. Who does this and what are the benefits that they find?

Davis has been at the top of sport ever since he was drafted by the San Francisco 49ers in the 2006 NFL draft, following his spell in college football with Maryland Terrapins. He is perhaps best known for his winning catch in the 2011–12 NFL playoffs or for winning the Super Bowl with the Denver Broncos.

It was reported that he turned to Bikram yoga to help maintain a calmer attitude. It seems to have worked, as Davis remains a highly competitive player but has managed to avoid the disciplinary problems that affected him earlier in his career.

Defensive end Williams is another NFL star who has turned to yoga. He was signed by the New York Jets in the 2015 draft, having achieved a high college football ranking while playing at USC. His 4-year contract with the Jets was reported to be worth $18.6 million.

Williams pointed out that yoga is a good way of improving his balance, which is crucial in the position that he plays. Certain postures clearly work more effectively for different positions out on the field.

Lewis was one of the first high-profile NFL players to speak out about the benefits of yoga. He played his entire 17-year career with the Baltimore Ravens and won numerous awards. Before going pro, he had played his college football with the University of Miami.

He has spoken about how beneficial yoga can be for football players, and always tried to get the members of his own defensive line to take part. Interestingly, Lewis said that he was wasn’t a fan of Bikram yoga, though.

He is now retired from the game, but Cruz had a terrific career. He was undrafted in the 2010 draft but the Giants signed him up shortly afterwards. After this, he went on to win the 2012 Super Bowl with them.

Cruz confirmed in interviews that the whole Giants team could take part in yoga classes. It was obligatory for rookies and optional for experienced players. He says that it helped him immensely in areas such as breathing, mental toughness, and getting the right focus.

At the time of writing this, Wheeler is a free agent. However, it is generally considered that injury problems and off-field issues have held him back, rather than a lack of talent. His spell with the USC Trojans college team was followed by his signing, as an undrafted free agent, by the Giants.

Speaking about yoga, Wheeler said that he feels proud of being able to get into postures that other players can’t manage. He pointed out that he can stretch into positions that even more athletic team-mates can’t manage.

Many more NFL teams now encourage their stars to carry out yoga as part of their training routines. Other players say that they carry out this sort of exercise on their own.

Either way, it seems that the presence of yoga in football is only going to increase over time. The more players speak out about the benefits, the more likely it is that others are tempted to give it a try for themselves.

If you like football yourself, checkout BetAmerica for the best odds on over 20 sports.

Read the Polls. Debate Them. Definitely Don’t Count on Them.