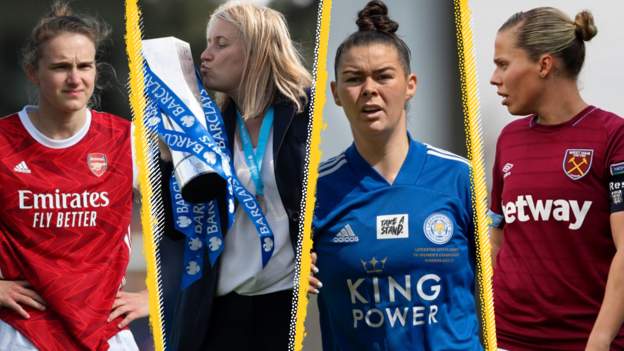 Women’s Super League: Why this season is a must-watch

The Women’s Super League is back and it could be the biggest and most exciting season yet.

With a new broadcast deal in place – allowing matches to be shown live on BBC and Sky TV – there will be more eyes on the WSL than ever before.

It is expected to attract record audience figures and become one of the most watched women’s sport leagues in the world.

BBC to show 22 WSL matches starting with Everton v Manchester City on Saturday at 13:15 BST on BBC One, iPlayer and BBC Sport websiteOn Sunday live commentary of Arsenal v Chelsea (12:30) on BBC Radio 5 Live & Brighton v West Ham (14:00) on the BBC Sport website and appWeekend highlights on The Women’s Football Show on Sunday on BBC One at 22:30More on BBC’s WSL coverageThrow into the mix the return of fans in stadiums, a potentially blockbuster title race, new managers and a number of international stars – it is a campaign you do not want to miss.

On Saturday, Everton v Manchester City will be shown on BBC One, iPlayer and the BBC Sport website at 13:15 BST, becoming the first ever domestic women’s league game shown on network free-to-air television.

It will be one of 22 live WSL matches on the BBC this season.

Full WSL opening weekend fixturesWomen’s Super League signings to watch this seasonWho will win Women’s Super League and who will be relegated? Your predictionsHer Game Too: The campaign to tackle sexism within footballCan anyone close the gap?The biggest question is whether anyone can beat Chelsea, who retained their title last season, as well as reaching the Champions League final for the first time.

Emma Hayes’ side lost just one game, but were taken all the way to the final day as Manchester City remained hot on their heels.

A two-point gap was all that separated the rivals and it could be another thrilling battle this season, with both teams strengthening in the transfer window.

And while Chelsea and City look set to remain on top, challengers have been building below with Arsenal set to embark on a new era under Swedish boss Jonas Eidevall.

The Gunners, WSL champions in 2019, have new players – including England’s Nikita Parris – as well as a new manager and we could even see a new style of play.

Everton have recruited strongly and are eyeing up a Champions League qualification challenge, while Brighton and Tottenham have been ambitious in the transfer market.

Can Everton close the gap on WSL top three?Are Chelsea even stronger? To remain on top, Chelsea have needed to strengthen.

They were able to recruit one of their priority targets – teenage forward James, who joined from Manchester United in a high-profile four-year deal.

With Pernille Harder, Sam Kerr, Magdalena Eriksson and Ji So-yun already on their books, it is hard to improve a squad packed with talent, so adding further depth has been their intention.

Who are the new international stars?English league is best in women’s football – LosadaLast season saw several big stars from across the pond join the WSL and it has been no different this summer.

Everton have welcomed home England forward Toni Duggan from Atletico Madrid and former Juventus midfielder Aurora Galli will become the first Italian to play in the WSL for the Toffees.

Losada relishes return to WSLDuggan on coming ‘full circle’ with Everton’Style of play key to move’ – ShawDowie ‘needed’ WSL returnWho are the new managers?Jonas Eidevall (left), Scott Booth (centre) and Marc Skinner (right) all join the WSL this seasonEidevall joined Arsenal from Rosengard in June following the departure of Joe Montemurro after four years in charge.

The Swede, who had a brief spell as Henrik Larsson’s assistant at Helsingborgs, led Rosengard to three league titles in two spells and helped them reach the quarter-finals of last season’s Champions League.

Manchester United’s new boss Skinner impressed while at Birmingham City between 2016 and 2019, leading them to the 2017 FA Cup final.

He also guided the Blues to a fourth-placed finish in the WSL in his final season, before joining Orlando Pride in 2019.