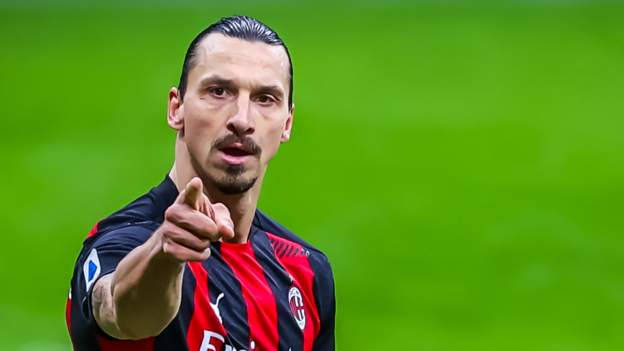 Zlatan Ibrahimovic: How the AC Milan striker is producing a European renaissance

Ibrahimovic began his professional career with Malmo before going on to play for Ajax, Juventus, Inter Milan, Barcelona, AC Milan, Paris St-Germain, Manchester United, LA Galaxy and Milan again”I think I’m like wine. The older I get, the better I get.”

Zlatan Ibrahimovic has always had plenty to say but part of what makes him so special is his ability to back up even the boldest, self-aggrandising statements with action.

It is something he has continued with unexpected regularity during a 2020-21 season that has seen him score 14 goals in just 12 league games to spearhead AC Milan’s own unlikely challenge at the top of Serie A – all at the age of 39.

His evergreen efforts have also seen him enter an exclusive group, as the scorer of 500 club career goals.

This weekend, the Swedish striker will be firmly in the spotlight, for good reasons and bad (more on that in a bit), as AC face Inter in a Milan derby that could well help shape the narrative of the current Italian top-flight title race.

‘Dear Los Angeles, you’re welcome’To get the full context behind Ibrahimovic’s current European renaissance, we must understand the journey he has undertaken in recent years.

The cruciate ligament injury he suffered in his second season at Manchester United in April 2017 was one that can spell the end for players in their prime, never mind their mid 30s, but the Swede battled back.

Moving to America to join US side LA Galaxy was seen by some as a slip into semi-retirement ahead of a well-earned shift into the full thing but 53 goals and a place in the MLS best XI two years running disproved that.

Then came the return to AC Milan, for whom he scored 42 times in 61 league games to inspire to an 18th Serie A title in 2011 and second-place finish the year after.

Eight years later, he was re-joining a very different Rossoneri – a fallen, faltering one. Surely this was a move based on romance as opposed to realism? Nope.

He joined with the club floundering in 11th in Serie A. Ten goals in 16 starts later they had finished sixth and qualified for Europe.

In typically forthright style, he declared that Milan would have won the league had he played the entire season, adding that he was “just warming up”.external-link

True to form, he wasn’t kidding.

‘If I was here from day one we’d have won the championship’Ibrahimovic’s numbers this season are stunning.

His goals tally of 14 – making him Serie A’s joint second leading scorer – is undoubtedly the headline. Only Romelu Lukaku and another evergreen forward, Cristiano Ronaldo, have more, with 16 each.

What is truly remarkable, though, is his ruthlessness and efficiency in front of goal. He is currently scoring at a ratio of 1.17 goals per game and clocking a strike every 69 minutes.

Only two players with goals in double figures in Europe’s top five leagues can better his minutes per goal – Bayern Munich’s Robert Lewandowski and Atalanta’s Luis Muriel, who has netted regularly despite only seven of his 20 league appearances this season being from the starting XI.

Only Lewandowski possesses a better goals per game ratio than the Swede.

His shot conversion rate of 24.56% puts him ninth in the list of all players in Europe’s top five leagues to have attempted 40 shots or more.

‘Fruit, vegetables and a bit of taekwondo’How then has Zlatan defied father time to continue to excel at an age when most of his peers are either long retired, coaching, or sat in television studios?

Diet is a huge part of it, as is an adapted exercise regime.

“You’re talking about fruit and vegetables and only white meat,” Spanish football expert Guillem Balague told the BBC’s Euro Leagues podcast. “Pizzas are reward, no sugar. He does a little bit of taekwondo too.”

Fellow journalist James Horncastle added: “He has spoken how he has had to change his physique and become more physical.”

At the heart of it, though, is a hunger to remain at the top, to push himself to the lofty status he is so fond of declaring himself to be at.

“He loves to be on the stage,” said Balague. “He doesn’t see what he is doing as a job, but something he is passionate about and that drives you.”

“He loves the stage and because of his competitive nature he wants to see that in his team-mates,” continued Horncastle. “That is why this Milan team has flourished.

“You have to take your hat off to Ibra. When he arrived in January he said ‘if I had been here all year we would have won the league’. Everyone thought that was bravado but look where they are now.”

Ibrahimovic is now the fifth oldest centre-forward in Serie A history, although he has some way to go to beat the record, set by Italo Rossi, who appeared for Pro Patria on 8 April 1951 aged 52 years, 11 months and three days.

In the modern era, though, he is closing in on Sergio Pellissier and Francesco Totti, who played for Chievo and Roma respectively at the age of 40 within the last five years.

PlayerClubAgeGamesGoalsNinoElche40121Zlatan IbrahimovicAC Milan391214JoaquinReal Betis39181Rodrigo PalacioBologna39231Jorge MolinaGranada38319Fabio QuagliarellaSampdoria38208Goran PandevBologna37173Franck RiberyFiorentina37181Cristiano RonaldoJuventus362723’We are all players some better then others’A mural of the clash between Romelu Lukaku and Zlatan Ibrahimovic next to the San SiroThere is, of course, another reason many eyes will be on Ibrahimovic during the Milan derby and that is his one major blot in his copybook for this season, which came the last time the Milan sides met.

Both he and Romelu Lukaku had scored for their respective sides as January’s Coppa Italia stood at 1-1 just before the hour mark.

A clash between the pair, along with some unsavoury comments – which included Ibrahimovic calling his ex-Manchester United team-mate a “little donkey” – saw both sent off and subsequently banned for one match.

Christian Eriksen scored a winner for Inter in extra-time.

On Sunday, the red and black side of Milan will be hoping it is only the boots of their star man doing the talking.