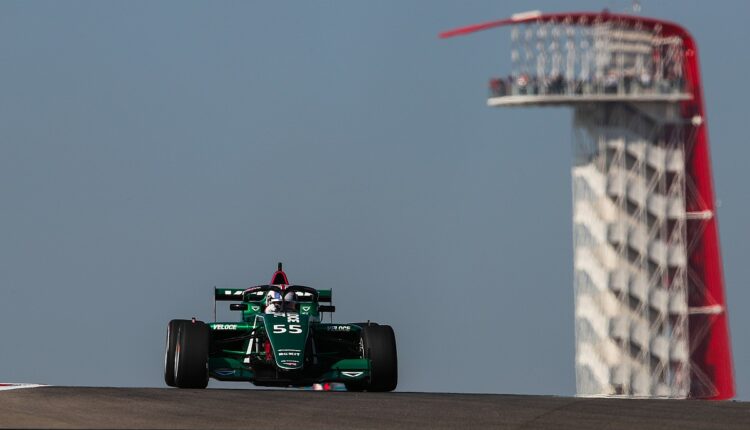 The reigning champion set a 2m06.429s to lead the first session in Austin for Veloce Racing, with title rival Alice Powell finishing in seventh for Racing X.

Chadwick and Powell head into the season finale joint on 109 points, with the latter leading with three wins, having won last time out at Zandvoort, to Chadwick’s two.

Pulling finished second for the PUMA team in just her third race weekend in the series, 0.2s behind the leader. The Briton previously raced at Silverstone and Zandvoort, and was competing in British F4 until she was forced to withdraw due to a lack of funds.

Emma Kimilainen, who sits third in the drivers’ standings for Ecurie W, finished the session in 13th.

W Series Academy driver Nerea Marti was first out on track, while teammate Irina Sidorkova is replaced by Caitlin Wood this weekend after the Russian driver was denied a US visa.

Fabienne Wohlwend led the field after the first 10 minutes of the session, with a 2m07.917 putting her a tenth clear.

But the Bunker Racing driver was pipped to the top spot minutes later by Chadwick, who set a 2m07.449s at the halfway point.

Track limits at Turn 19 caught out several drivers, including Powell, Chadwick and Hawkins, who all had lap times deleted.

The yellow flags were waved after Wohlwend suffered a spin in Sector 1, running wide into the run off before the same fate befell Kimilainen seconds later towards the end of her lap.

Sabre Cook, driving at her home race, also suffered a spin in her Bunker Racing-sponsored car with three minutes remaining, finishing in 17th.

This is the first W Series event to hold two races in one weekend after a planned final race in Mexico was cancelled due to logistical challenges.