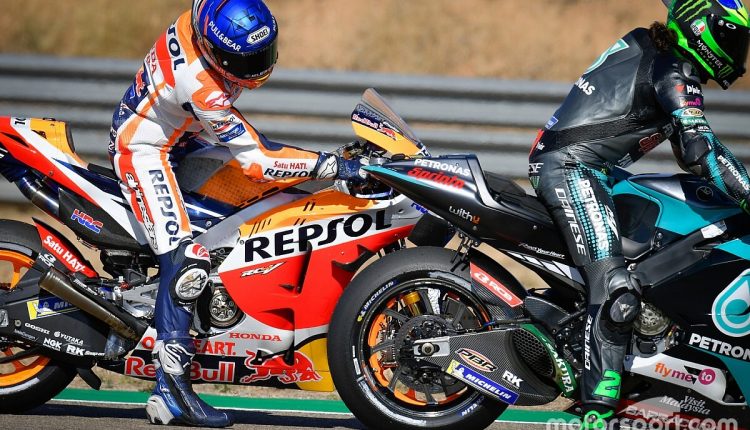 Marquez: Yamaha “cheated” – and the riders knew it

Yamaha was docked 50 constructors’ points on Thursday after an FIM investigation found the Japanese marque had used engines fitted with non-homologated valves for the Spanish GP in July.

The penalty has not impacted any of Yamaha’s three championship contenders in Franco Morbidelli, Fabio Quartararo and Maverick Vinales, but some – including Suzuki boss Davide Brivio – have said a Yamaha title win would cast a “shadow” over the season.

Yamaha insists the valves it used were not of a different design to those it had homologated pre-season, and that this infringement was an “internal oversight”, while Morbidelli, Quartararo and Vinales have all denied they knew their Spanish GP engines were illegal.

But Honda rider Marquez says he doesn’t buy this, and also believes the other Yamaha riders knew what was going on.

“What is clear at the end is that they have cheated or have not been within the regulations,” Marquez said of Yamaha.

On the riders’ claims they were not aware of any transgressions, he added: “The excuse of ‘I did not know’ exists [but] at all times the factory is very open and you know what engine you are using.

“You know everything, you are up to date. As a rider you are always watching when they install an engine or store it, always you are aware of what you are using.”

Ducati’s Andrea Dovizioso admits “I don’t understand” the ruling handed down to Yamaha, and is equally perplexed at why the other manufacturers accepted the punishment.

The points docked from Yamaha’s constructors’ championship are only from the Spanish GP, which Quartararo won.

“That’s what I don’t understand,” Dovizioso, who is 28 points off the championship lead with three rounds to go. “I’m not understanding the strategy of the various manufacturers, which seem to have agreed not to go against [the ruling].

“I don’t know all the details, so I don’t want to sentence, but it seems very strange to me.”