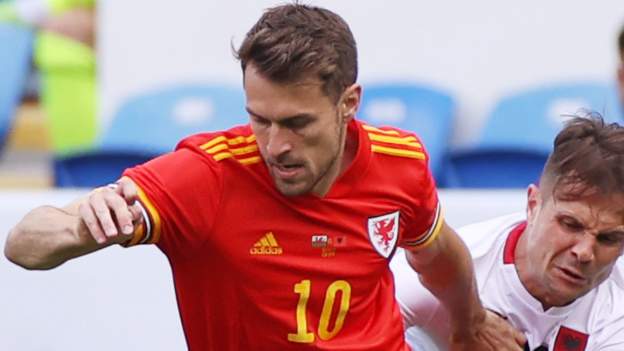 Wales had lost against Albania when the teams last met for a friendly in 2018Wales fans made an emotional return after 18 months away, but their team could only muster a goalless draw with Albania in their final friendly before Euro 2020.

While a crowd limited to 6,500 at Cardiff City Stadium provided the noise of a full house, the first half was a damp squib in which a disjointed Wales side struggled.

The half-time introduction of striker Kieffer Moore gave the hosts some much-needed attacking impetus, with Neco Williams forcing Albania goalkeeper Gentian Selmani into a fine save.

Despite that improvement, Wales could not summon the moment of quality to overcome spiky opponents ranked 49 places below them in the Fifa world rankings.

Wales have plenty to work on, says defender DaviesAlthough Wales would have liked to have prepared for next Saturday’s opening Euro 2020 fixture against Switzerland with a more convincing performance, the second half was at least a marked upgrade on the first. And more importantly, they managed to avoid any late injuries and give several of their players a useful workout.

Ultimately, however, this game will be remembered for the return of Wales fans.

The last time Wales had played in front of their supporters was a 2-0 victory over Hungary in November 2019 which sealed qualification for Euro 2020.

With the pandemic causing the tournament to be postponed a year and denying the Red Wall the chance to follow their team, this was a reunion which set hearts racing.

Even with less than a fifth of their usual number, Wales’ supporters sang their national anthem with a strength of feeling and volume which belied this fixture’s status as a mere warm-up friendly.

Despite the rousing atmosphere, though, the match itself failed to ignite as a much-changed Wales side started slowly.

Interim manager Robert Page was testing a couple of ideas before facing Switzerland, such as playing Juventus midfielder Aaron Ramsey in a new role further forward as a false nine.

Aaron Ramsey was making only his second Wales start since November 2019Ramsey struggled to adapt to his new position, dropping into deeper, more familiar areas of the pitch while some of his team-mates seemed unsure of their responsibilities in a 3-4-3 formation so fluid it bordered on shapeless at times.

The result was of no real importance. The purpose of this game was to hone tactical approaches and improve the fitness of players such as Ramsey and captain for the day Ben Davies, who were both working their way back to match sharpness after injuries.

Even with that in mind, however, the listless nature of Wales’ first-half performance was a concern.

Several players looked lost in new roles and it was clear Page needed to make changes, which he did at half-time by introducing Cardiff City striker Moore and switching from the 3-4-3 system to a 4-2-3-1 formation which instantly looked more balanced.

As it happened: Wales 0-0 AlbaniaAlmost every Wales player looked more assured in the new set-up, even if genuine scoring opportunities remained rare.

Williams tried his luck with a well-struck shot from 30 yards which went over and had another powerful long-range effort saved, but the closest either side came to scoring was a first-half chance for Albania’s Rey Manaj, whose shot flew over the bar.

This encounter gave Page plenty to consider as he weighs up which tactical approach to choose for next weekend’s meeting with Switzerland in Baku.

And while it was a worthwhile exercise, the abiding memory of this match will be the return of Wales’ fans, who serenaded their team on their lap of honour after the final whistle, for the vast majority their last chance to see the players before they embark on only a third major tournament in the country’s history.

Amir Abrashi (Albania) wins a free kick in the defensive half.

Jonathan Williams (Wales) wins a free kick in the defensive half.

Attempt missed. Chris Mepham (Wales) header from the left side of the box misses to the left. Assisted by Harry Wilson following a set piece situation.

Qazim Laci (Albania) is shown the yellow card for a bad foul.

Jonathan Williams (Wales) wins a free kick in the attacking half.

Jonathan Williams (Wales) wins a free kick in the attacking half.

Gareth Bale (Wales) wins a free kick in the defensive half.

Gentian Selmani (Albania) wins a free kick in the defensive half.