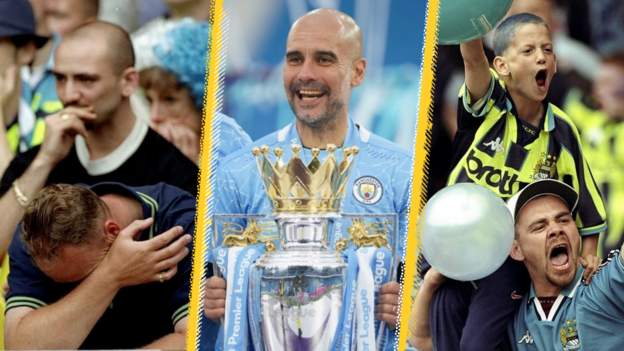 Manchester City fans were contemplating a second season in the third tier as Gillingham led 2-0 after 87 minutesManchester City are set to play in the biggest game in club football on Saturday.

Yet, win or lose, many of their ‘legacy fans’ will tell you it’s not even the most important game in the club’s history.

They’ll point to 1999, when City had dropped out of English football’s top two divisions for the first time. They languished in what is now League One, but was then known as Division Two.

Emily Brobyn, a 17-year-old student at the time, was among the 38,000 “distraught” City fans at Wembley after Gillingham went 2-0 up late on.

“It was all United and Liverpool fans at college and constant bullying,” she says.

“I was sobbing on my dad’s chest and said: ‘You don’t understand the grief I’ll have to deal with. United have just won the Treble and we can’t even get out of Division Two!'”

What happened next would change the course of the club’s history.

The sliding doors moment that helped transform Man City’It was grim, we knew we weren’t even going to be entertained’After winning five trophies from 1968-1976, City had become a laughing stock by the late 1990s. En route to being relegated twice in three years, they also had six managers in 17 months.

Rival fans chanted ‘you’re not famous any more’ while Blues started singing ‘we’re not really here’. But they were there, as a crowd average of 28,261 at Maine Road proved. City had bigger home crowds in Division Two than in the top flight three years earlier.

“Everyone kept going – we developed a siege mentality,” says Peter Conner, 41. “United doing so well almost made you more determined. It was the lowest we’d ever been so it was time to show your support.”

Before facing Gillingham in 1999, City’s last major trophy was the League Cup in 1976The team scrapped their way to the play-off final, before which City-supporting singer-songwriter Noel Gallagher joked “at least we’re not going to get relegated”.

It was 0-0 at Wembley with nine minutes to go. But then Carl Asaba gave Gillingham the lead. With three minutes left, Robert Taylor made it 2-0.

“I still remember that when Gillingham’s first goal went in, a young boy in front of us started crying and was comforted by his dad,” says Peter’s father Roy, 77.

“When the second went in, the fella was crying and the son was comforting his dad.

“You don’t support City for success – you support them for moments like that. After the depths we sank to, I just see any success now as a huge bonus for our loyalty.”

Noel Gallagher on Pep Guardiola and Man City’s Champions League chances’It chokes me up thinking about what it meant to people’Legend has it that Gallagher was among the City fans that left early, resigned to spending another season in the third tier.

There was no chance of Peter making a swift getaway. He was at the game on crutches because of a broken leg. Emily only came back from the concourse because she’d left her coat on her seat.

But in the 90th minute, Kevin Horlock pulled a goal back. Five minutes were indicated for stoppage time. On 94 minutes and eight seconds, Paul Dickov fired home to make it 2-2 and secure extra-time.

Nicky Weaver then saved two penalties in the shootout to ensure City were promoted.

“All around me, grown men were crying, it was breaking their hearts,” says Emily. “Then Dickov scored and it was pandemonium.

Timeline of a transformation since 2008 Sheikh Mansour takeover”It still chokes me up thinking about what it meant to people because the future of the club was so uncertain. Could they have survived another season in that division? You look back and think ‘what if we didn’t do it?'”

Winning promotion back to the Premier League the very next season, as City did under Joe Royle, would have been impossible. Their bleak financial position meant they wouldn’t have been able to keep the squad together in Division Two and the deal to move into the 2002 Commonwealth Games stadium – which became Etihad Stadium – almost certainly wouldn’t have gone through.

Without a new stadium, the club probably wouldn’t have been taken over by Thaksin Shinawatra in 2007 and, far more significantly, Sheikh Mansour in 2008.

And without the project he has delivered, there’d be no Sergio Aguero title winner in 2012, no Vincent Kompany thunderbolt in 2019, and Emily’s two young boys wouldn’t be called Vincent and Noel Sergio.

A day to remember for City fans after a decade of Sergio Aguero’We were down among the dead men, but we took it on the chin’Andrew Bucknall has been watching City since 1976. Now his daughters are also season-ticket holdersAndrew Bucknall, 53, grew up in a different era. The legendary team that won the 1968 league title and the 1970 European Cup Winners’ Cup was still fresh in the memory.

“We were relegated and promoted through the 80s, but I never saw us as that kind of club,” he says. “Even the song, We’re Not Really Here, was like ‘we’re living this, but this isn’t really us’.

Inside the deal that made Man City the richest club in the worldCity’s owners have transformed the club on and off the field, helping them become the dominant force in English football over the last decade. But that investment has changed attitudes towards the club and their fans.

“We’ve always had people chipping away at us,” Andrew adds. “They’ve waited for our owners to get bored and leave but they’ve built a legacy that will last for generations.

“We still don’t get the credit we deserve. Liverpool win the league and they’re ‘the best team ever’. We win a treble and it’s ‘well, you’ve not won the Champions League’.”

Emily says: “You always used to get ‘you support City? Aw, what a shame’. Now we get the ‘money’ thing thrown at us all the time. I feel like I’m constantly having to defend us. It’s tiring.

“Maybe we did win the lottery, but what are we supposed to do, walk away? After all we’ve been through? We just signed up to be loyal to our club.”

Champions League run has ‘captured imagination of legacy fans’Andrew sees winning the Champions League as “the last box that needs ticking” and beating Chelsea in Porto “would be the perfect way to start a 10-year cycle of European dominance, like we started 10 years of domestic dominance with the FA Cup win” of 2011.

Like many of City’s older fans, Peter had “never been that bothered” about success in Europe.

He says: “It’s like we’ve been the rebels in the Champions League, but the way we’ve played in Europe this season has changed things. It’s captured the imagination of the so-called legacy fans.

“Whether we win or lose on Saturday, it feels like we’re now truly part of Europe’s elite.”

And Emily will be one of the lucky few who’ll be able to say ‘I was there’ for both the play-off final and the Champions League final.

“If we don’t win it, there’s always next season,” she says. “And it won’t be as bad as getting relegated to Division Two.”

Sneakernomics: A tale of two siblings, the world’s biggest sports brands and a bitter rivalryPain, Power and Progress: Special 1Xtra Talks reflecting on a year since the death of George Floyd

How Your CRM Platform Can Make Your Customers Happier