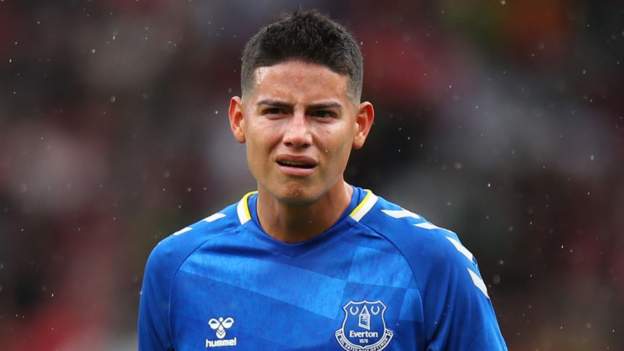 James Rodriguez: What next for Everton’s Colombian playmaker after mixed first season?

James Rodriguez’s only appearances this season have come in friendlies after he was forced to isolate for coronavirus-related reasonsLast Tuesday was the one-year anniversary of James Rodriguez signing for Everton.

For a player billed as “one of the world’s most popular footballers” and for whom the club lit up Colombia’s tallest building with an Everton shirt when they signed him, there was little to mark his 12 months at the Toffees on the club’s social media channels, except for their Spanish Twitter account.

Thanks to the pandemic and Rodriguez’s persistent injuries last season, supporters at Goodison Park have yet to see the mercurial Colombian in the flesh.

There have been undoubted moments of brilliance, but there are still questions from new manager Rafael Benitez about his commitment and whether the 30-year-old has been worth reported wages of over £200,000 a week.

His status has not been helped by the exit of former manager Carlo Ancelotti, who was a key factor in bringing the playmaker to Merseyside, having worked with Rodriguez at Real Madrid and Bayern Munich.

Instead, and with the transfer window now closed, he has to break bread with Benitez, who has shown little evidence of being a huge fan, and coincidentally also took over from Ancelotti at Real back in 2015 when Rodriguez was still at the Bernabeu.

It all means Rodriguez can either knuckle down and show he has the appetite to meet Benitez’s expectations or potentially jeopardise any goodwill he has built up with Everton fans.

“It’s not easy,” Benitez said on Friday in response to Rodriguez being linked with Istanbul Basaksehir. “We don’t have any doubt about his quality. What we have to be sure about is that we have players playing 90 minutes with the intensity that we are looking for.”

James Rodriguez had a special bond with Carlo Ancelotti, and scored six goals and had four assists in 23 Premier League appearances last seasonA first season of wonder and despair Benitez’s assessment is at odds with that of Ancelotti, who answered “I didn’t buy James so he could run” when questions first began to be raised about the Colombian’s efforts last season.

To illustrate the point, new wingers Demarai Gray and Andros Townsend are – after three league games – respectively just one and two sprints short of Rodriguez’s total of 37 for the whole of last season.

But back at the start of his time on Merseyside, he quickly demonstrated that his touch, vision and range of passing remained as good as ever as Everton marched to the top of the Premier League during a four-game winning streak.

In that heady spell, with a Champions League-winning manager in Ancelotti on board, it appeared as if results were starting to back up the talk coming out of Goodison about a top-four challenge. Rodriguez, who scored three goals and registered two assists in those four games, looked like a brilliant acquisition.

Then came the Merseyside derby, however. In a typically tempestuous 2-2 draw, Rodriguez picked up another assist, but also the first of many injuries, and Everton lost their momentum.

Persistent calf problems then caused Rodriguez to miss further games in December, March and May.

Despite Ancelotti’s denials, it looked like Rodriguez was struggling with the physicality of the Premier League, especially coming off a season in which he had managed only 14 appearances for Real.

There were still moments when he showed his undoubted quality – a memorable assist in a historic win at Anfield in the return derby, brilliant goals against Leicester and Manchester United, diagonal passes worth drooling over – yet as Everton began to struggle at home, his lack of pace in a slow midfield also hampered them.

Opponents began to realise that they could attack down the right of midfield, where he was often stationed, and former Everton winger Pat Nevin says the Colombian’s own creative play became “slightly predictable”.

The former Scottish international adds: “Playing on the right, he was cutting in and sending it to the left, where Everton would overlapy, and if I can see that other managers will see that, and if you don’t have pace to go by people it limits your options.

His final act of a mixed season did not help his reputation either. He missed the last game through injury, but instead of sticking around to support the team, who were thumped 5-0 by Manchester City, he was pictured on a private jet before the match, heading to the Copa America. It perhaps hinted at where his priorities lay.

Building bridges with Benitez? James Rodriguez played under Rafael Benitez when they were both at Real Madrid following Carlo Ancelotti’s departureRodriguez’s status as a world star was cemented at the 2014 World Cup in Brazil when he won the Golden Boot, his goals including a brilliant volley against Uruguay that was named the goal of the tournament.

Later that summer, he secured a £71m move to Real Madrid where he became the latest in a long line of ‘Galacticos’ under Ancelotti, before Benitez and then Zinedine Zidane took over at the Bernabeu, hastening a move to reunite with Ancelotti at Bayern Munich on loan.

Since his breakthrough on the world stage, he has gathered a huge global platform with 102 million social media followers, which is 10 times more than Everton, and perhaps explains his reluctance to do many interviews.

In fact, his most notable recent comments have been during his regular gaming stints on social media channel Twitch. He said Ancelotti’s shock departure to Real Madrid in June made him feel like Sergio Aguero, who joined Barcelona only for global legend and fellow Argentine Lionel Messi to leave for Paris St-Germain.

As a statement of his commitment to Everton, it was underwhelming – and it wasn’t helped by admitting he didn’t know who the Toffees were playing next as he remained sidelined during a period of isolation.

The awkward truth regarding Rodriguez’s future is that Everton have made an unbeaten start to the season without him – victory at home to Burnley on Monday evening would see them join the Premier League’s leading sides on 10 points from four games.

Benitez has emphasised that hard work and a battling approach will be the foundation of his plans.

Given several chances to back Rodriguez before the opening weekend against Southampton, Benitez said: “As a manager you put a team on the pitch that can win games so I am not checking the name of the player, the popularity or how many followers they have in their social media, it’s just to be sure that they can do the job.”

Those comments came before the transfer window shut, but now Benitez still has Rodriguez in his squad, Nevin believes he will play his part under the former Liverpool boss.

“Rafa is an exceptional coach and he’s not daft,” Nevin says. “If Rodriguez is there until January at the least, why would you have that type of quality and not use it?

“Games aren’t just about who starts, it’s about what happens during them, and on pure match intelligence and opening up defences, James is probably the best player in the team, so you wouldn’t ignore that. Almost certainly, there will be situations which suit him, especially as the squad lacks depth compared to the top Premier League teams.”

On Friday, Benitez hinted that Rodriguez’s Everton future was very much in his own hands. “I think he realised that he has to improve in a lot of things. He has to focus, he has to show his commitment,” the Spaniard said.

“It’s what he is trying to do and that is good news for us because he can give us something more.”