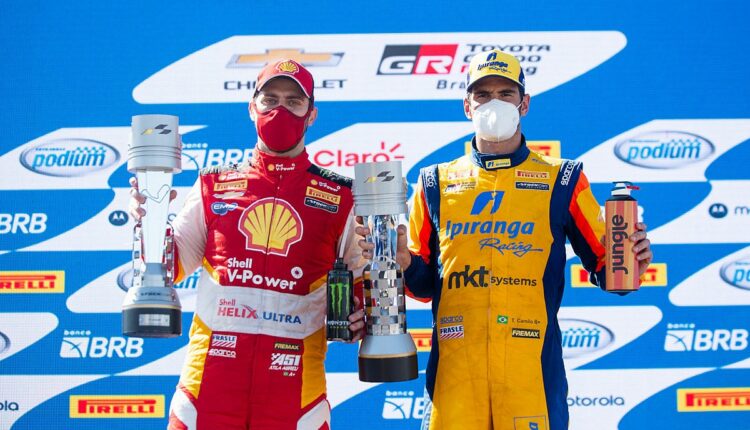 The two races were the first in the career of Eduardo Barrichello, 19-year-old son of ex-Ferrari F1 star Rubens, who currently races in the Formula Regional European by Alpine as part of Toyota Gazoo Racing program. He replaced Matias Rossi, who faced problems with travel restrictions between Brazil and Argentina due to COVID-19.

In the first race, Ipiranga Racing duo Thiago Camilo and Cesar Ramos maintained their dominance of Saturday’s qualifying session. Camilo achieved the 33rd victory of his career without any major problems.

“The team’s tactics worked perfectly,” he said. “We ran a strong pace in the first laps, entered the pits with a good advantage over the others and managed until the end.”

Gabriel Casagrande took the final step on the podium in third position. Barrichello Sr was fifth, right behind Daniel Serra.

In the second race, Abreu dominated the action but still had to hold off late pressure from Ricardo Zonta to score the victory. This was the first win for Pole Motorsport, a new Stock Car team in 2021.

“I just have to thank everyone who encouraged and supported us to make this big change of entering the series with our own team,” said Abreu. “It was an arduous challenge, the main teams have four to six cars, so if you get the details wrong you’re already out of the top 10.

“I didn’t expect this victory so soon, but this feeling of victory coming when it was not expected is very gratifying. We still have many things to improve, so we will keep working hard to follow this positive path.”

Casagrande was again in third place, while Eduardo Barrichello spun during the race but managed to finish in 25th place.

Barrichello Jr said: “The experience of racing here at Stock Car was very good, it will definitely be marked forever in my life. It’s been a long time since I had so much fun on a race weekend.

“The start was crazy. I was doing everything I could to get a great result, it’s very difficult to go fast and I managed to get a good performance. But with each lap I felt more comfortable and I could risk more.

“Even finding confidence is complicated, I had fights with guys like Caca Bueno, Nelson Piquet Jr, Sergio Jimenez, who are huge in motorsport. I’m very grateful.”

The next round of the Stock Car Pro Series will be in Curitiba on August 1st.